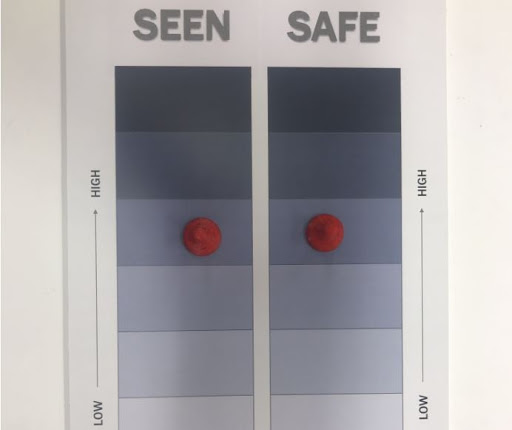 In our first two posts (Part 1 and Part 2), we described the origins of this UX and assessment project, and our research process. This final post describes our prototyping process, and resulting product, an interactive exercise to support library staff members’ understanding of our campus community.

After we collected our data the Library Lifecycle Team explored prototype options for our interactive resource. The resulting product was a card “game” representing three areas of influence: Personal Events, Group Events, and Identity. Based on information from our earlier interviews, and to test out our ideas, we created cards that contained information unique to undergraduate students. For example, “Personal Event” cards contained an impactful event such as getting a poor grade, catching pneumonia, or having a positive experience in office hours with a professor. “Group Event” cards described events that might affect the entire campus community such as hateful graffiti in a public area on campus, a sports team making it to a championship game, or dangerous weather. The “Identity” cards were split into six subcategories that covered a variety of “I Statements” taken from our interviews with undergraduate students. These six Identity subcategories were labeled: Demographics, Family, Financial, Health, Previous Schooling, Study Style, and Why I Came To This Institution. 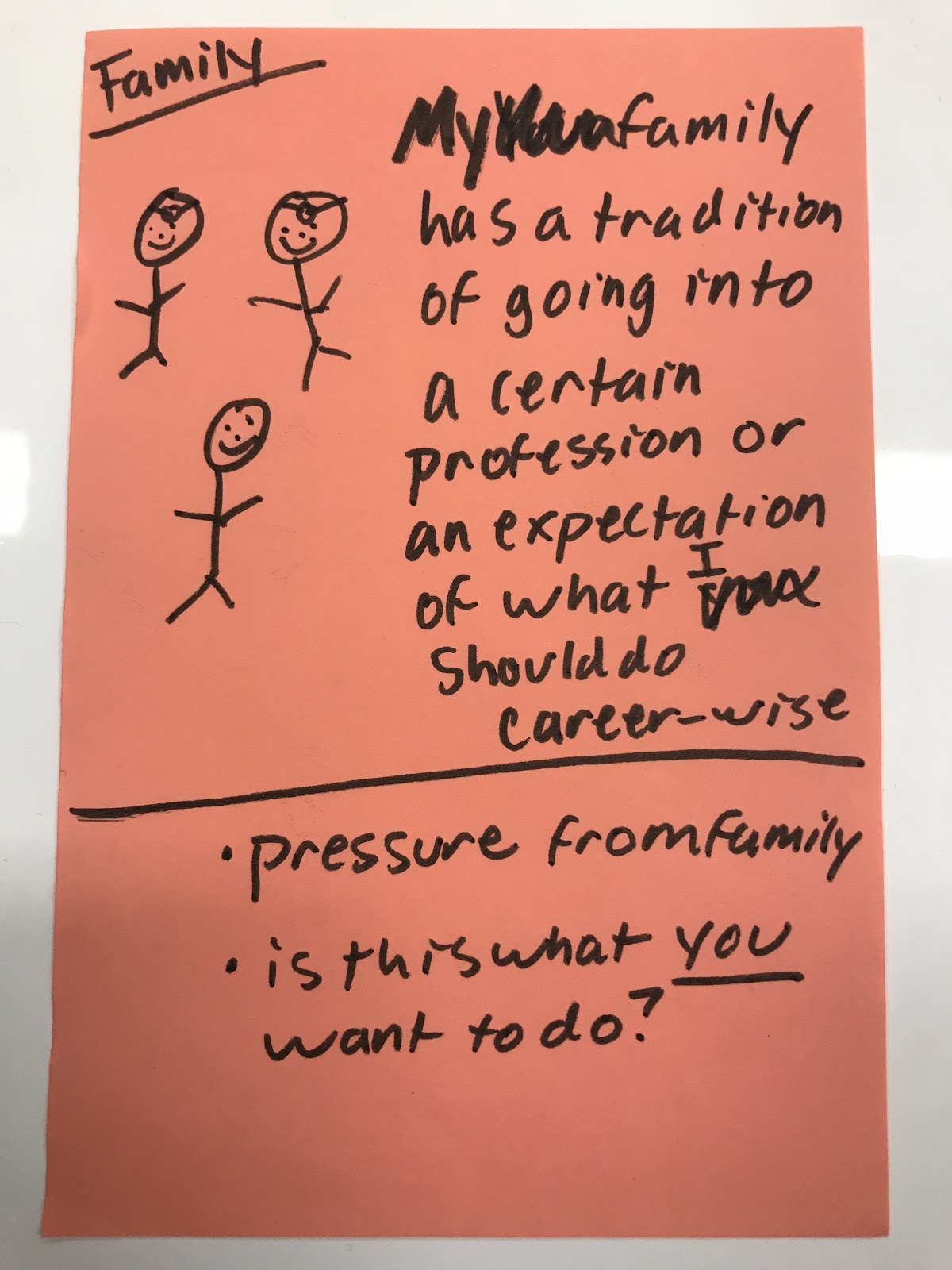 To begin the game, each player received a card from each of the six Identity subcategories. Players were tasked with creating a backstory containing all of those identities on a worksheet.  Players were encouraged to list out possible motivations for their characters, select a year in school and a major, and any additional contextual information they believed would be pertinent for their character.

After creating a backstory, players introduced their characters to the rest of the game group. Pieces representing characters were placed on a circular board (in the initial prototype the board was simply drawn on a whiteboard table), and told that they were now starting their fall semester at our institution. The character pieces moved through time with each round of the game, which was visually represented by moving the pieces on the game board. A Group Event card was selected at the beginning of each round. The card was read aloud and everyone was invited to react to the card immediately or wait until they selected a Personal Event card to react individually during the round.

When players finished reacting to the Group Event card, another round began with the selection of a Personal Event card. One player would select a card from the stack, read the card aloud, and then react to it out loud so that the game group could hear and think through the scenario as well.

To devote available resources to this project as the Library Lifecycle Team resumed their regular duties, the work was picked up by the Design Thinking Research Fellows as part of related IMLS grant work.

After the first round of iterations, we broke down the Demographic cards further into three new identity card categories: Race, Gender, and Sexuality. These three specific aspects of demographic information were selected because college is often a time when these parts of our identities are brought to the forefront of our minds. There wasn’t substantial information about these identities within our interview data to back up the "I Statements" so the data were drawn from a 2016 Campus Climate Survey, which had collected demographic information on the institution’s undergraduate population. Race, gender, and sexuality cards added different perspectives on campus life that were not previously represented in the game. We created a game facilitation guide to keep each round consistent, and added discussion questions for the end of the game so that players could reflect on their experiences together. Our first test group was the U-M Library Diversity Council (LDC). 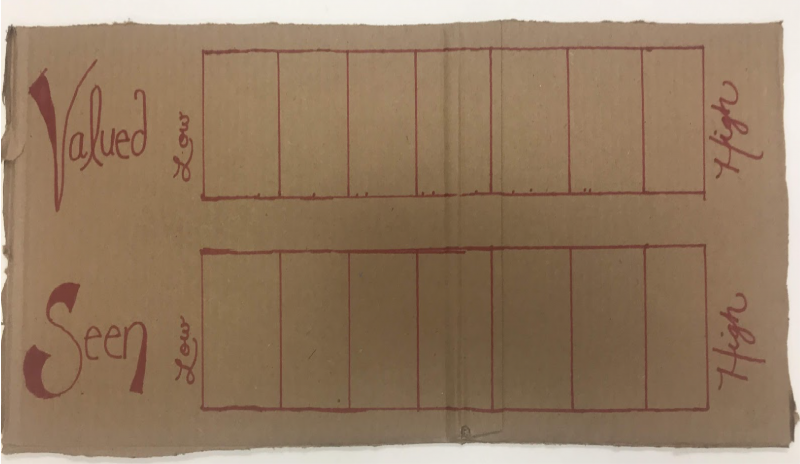 After playing through the game, LDC recommended that emphasis be placed on the story creation portion of the game, as this would allow staff to more fully step into their character’s shoes, while not embodying or representing a group. They suggested adding a "game board" element to increase group cohesion and conversation amongst the participants, and to help participants visualize how different events impacted students differently. LDC also gave helpful accessibility feedback, such as recommending the inclusion of a glossary that defined possibly unfamiliar terms like cisgender and Latinx. After making the changes recommended by LDC, we conducted iterative usability testing through three additional tests with library staff members.

The result of these usability tests is an exercise called Unseen: Exploring Users’ Campus Experiences. We stopped referring to our final product as a “game” because of negative feedback we received. The final version of the exercise consists of nine Identity cards in nine categories (Family, Financial, Gender, Health, Previous, Race, Schooling, Sexuality, Study Style, and Why I Came To this Institution) with prompting questions at the bottom of each Identity card, Personal Event cards, Group Event cards, a board with two sliding scales, two player pieces per person, user packets, and a facilitator’s guide.

The board consists of two sliding scales measuring “Safe” and “Seen.” We define “Safe” as “Feeling comfortable and content in a campus setting without fear of facing any physical and emotional distress.” “Seen” is defined as “Feeling like your identities are noticed by others.” Participants place their pieces on each scale after they have created their character and continue to move their pieces throughout the exercise in response to the Personal and Group Event cards.

The user packet contains a brief written explanation of the instructions, the worksheet with prompting questions for writing their character, a glossary of terms, and a Statistics sheet with information taken from a 2016 Campus Climate Survey. The statistics were included to openly showcase where we drew information about our undergraduate population beyond the interviews we conducted.

As with any research and assessment project, we recognized some limitations to our work. For example, the interview pool, while consisting of a variety of library users, was small (N=30). Fourteen interviews with undergraduate students served as the basis for our “I” statements used in Identity, Personal and Group cards. We intentionally focused on undergraduate students as they are the largest potential library user population. Further work is needed to support library staff when designing services for graduate students, staff, or faculty.

If you would like to access our exercise, it is available for download in Deep Blue. Within this record you will find materials that are customizable for your institution, a facilitation guide, and other instructions on how you can use Unseen to understand your users’ experiences as an aid to designing library services for all.