By Bhavana Garapati and Vennela Vellanki

Although the United States only has about 5% of the world’s population, it holds about 25% of the world’s prison population. According to the Prison Policy Initiative, the U.S. currently has about 2.3 million people in a variety of confinement facilities like federal and state prisons, local jails, juvenile correctional facilities, immigration detention centers, military prisons, civil commitment centers, and even state psychiatric hospitals to name some. While women currently make up approximately 10% of the currently incarcerated population, it is important to understand that the rate at which women are being incarcerated has been twice as much as men since the 1980s. Statistics collected by the Sentencing Project show that since the 1980s the number of women who are incarcerated has increased by more than 750%.

We found that many of the current resources speaking about mass incarceration in America are centered on the experiences of men but not as much is said about the experiences of women and gender nonconforming individuals. We believe that when discussing criminal justice reform, it is absolutely necessary to include women and gender nonconforming individuals in the discussion because their experiences precarcerally, carcerally, and postcarcerally, are uniquely shaped by their gender. Referring back to the Sentencing Project, 80% of women in jails are also mothers, most of whom were the primary caretakers for their children before being incarcerated. When women are incarcerated, there are these unique issues such as reproductive health that affect them and their families in ways that men do not necessarily experience. With this in mind, we wanted to create a platform to inform the general public about the experiences of women in the criminal justice system and create a space for those directly and indirectly affected by the carceral state to talk about their lived experiences and areas of expertise. We wanted to place a general focus on health because we believe that our current criminal justice system is a growing public health concern and is often left out of the conversation when we, as a society, talk about access to healthcare, among other things. Millions of individuals are getting locked up everyday for substance abuse offenses when they should be getting better access to treatments and resources to help with addiction as well as other monetary and mental health related concerns. Thousands of incarcerated pregnant women face horrific conditions because they lack any kind of proper access to reproductive healthcare. All of this--and more--needs to be brought to the attention of the public.

Women’s Health, Incarcerated is a podcast that seeks to educate the general public on the true experiences of gendered discrimination within the American incarceration system with a primary focus on health. Through the show and a supplementary website that will act as the podcast’s launching platform, we plan to provide not only information on this stigmatized and underrepresented issue but also resources regarding other material on women’s health in the carceral state as well as ways to get involved. We aim to inspire individuals to make a difference by recognizing the realities of the system and demanding change. This is a call to action to join the movement in dismantling the current structures that deprive millions of individuals of basic rights, perpetuate a cycle of oppression, and cripple opportunities for personal growth. Ultimately, we hope to re-instill the recognition of these individuals as human beings who deserve the right to adequate healthcare and living conditions, who deserve empathy for their lived experiences, and who deserve legitimate justice.

This project currently has two major components: a) the podcast and b) the website. Throughout the year, we have been working on both components simultaneously because we want the website to be a landing page for the podcast as well as provide additional resources for people to get more involved. For the podcast component, we decided to structure it in different seasons. We are currently in the development phase for season one, which will contain six episodes on various topics including menstruation and the trauma-to-prison pipeline. 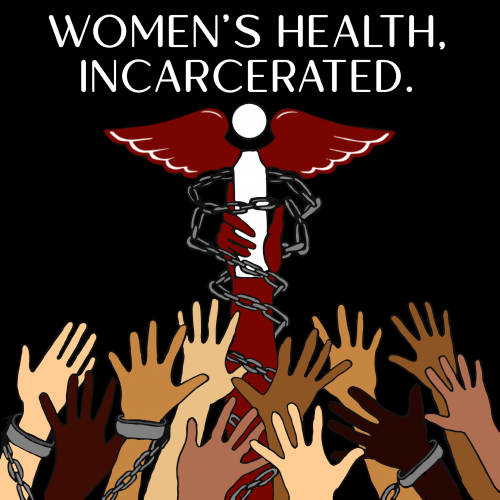 Our journey throughout the past year has been exciting, eye-opening, and has consisted of a lot of growth. In the beginning of this development phase, our focus was centered on creating the mission statement for our project, designing our logo and podcast art, and becoming an official entity in the state of Michigan. We then shifted our focus to the actual content of our podcast, finalizing the structure for episodes, and setting up interviews with individuals involved in the criminal justice space, including those who have been formerly incarcerated. The process to develop each episode consisted of: 1. picking a topic, 2. extensive research on the topic to gain a full understanding and figure out what aspects we want to emphasize in our episode, 3. writing the episode transcript by consolidating the information in a digestible manner to our listeners, 4. sending the transcripts to our mentors for editing and suggestions, and 5. restructuring the transcripts to fit our voices when we speak naturally.

Once we finalized the transcripts for our season one episodes, we then moved onto creating our voice for the podcast. This consisted of many practice runs with the transcripts to get comfortable with speaking into a microphone, learning how to present information in a natural and engaging manner, and creating a unique personality for the podcast. For the website, we used Squarespace to get an official domain and create the site, which consists of the landing page for the podcast and episode transcripts, background information on mass incarceration in America, as well as a list of books, documentaries, podcasts, local organizations, and websites for people to check out if they want to learn more and/or get involved.

We are currently still in the development phase of the project but anticipate to move into the production and releasing phase by July 2020. We hope this podcast will help inform and peak the interest of individuals who are currently unaware of the injustices occurring through the criminal justice system. We hope to gain a sizeable amount of listeners as we release season one and expect the initial listeners to be family/friends and members in the community who have helped make this podcast a reality; but eventually, we expect the podcast to reach a broader audience who may not know much (if anything) about the functionings of the carceral system in the U.S. We also intend to have the episode transcripts as well as plenty of information on ways to get involved set up on our website, and expect audience members to utilize these resources.

We have used the funds from the Library Grant to purchase much of the software needed to create and produce a podcast. Specifically, we were able to purchase the website domain on Squarespace and a couple of USB microphones. Despite being seniors a few weeks from graduation, we aim to continue this podcast for the foreseeable future. Therefore, we felt it necessary to purchase microphones in order to ensure high-quality sound-production in the short and long-term when we eventually begin recording from different locations.

Next Steps and Library Mentor Support

The next steps for this project include finalizing the transcripts for season one, recording, editing, and producing the remainder transcripts, and officially releasing the first season by the first week of July. We want to make this podcast available on all the major streaming outlets in addition to being available on the website. Afterwards, we intend to develop more seasons, develop our website to include as much local information (for every state in the country) possible, and, in the long-term, expand this project to include an actionable initiative that our listeners and the general public can partake in.

The University of Michigan library mentors that we worked with have been incredibly helpful in honing in our research skills for each episode topic, editing our transcripts, and connecting us with other experts in the field of podcast-creation. Through these connections, we were able to gain so much insight on what podcast editing software to use, how to find our voice, the best mics to record with, the importance of sound quality, how to make our transcripts sound natural, and other general advice on structuring and creating our own personal podcast.