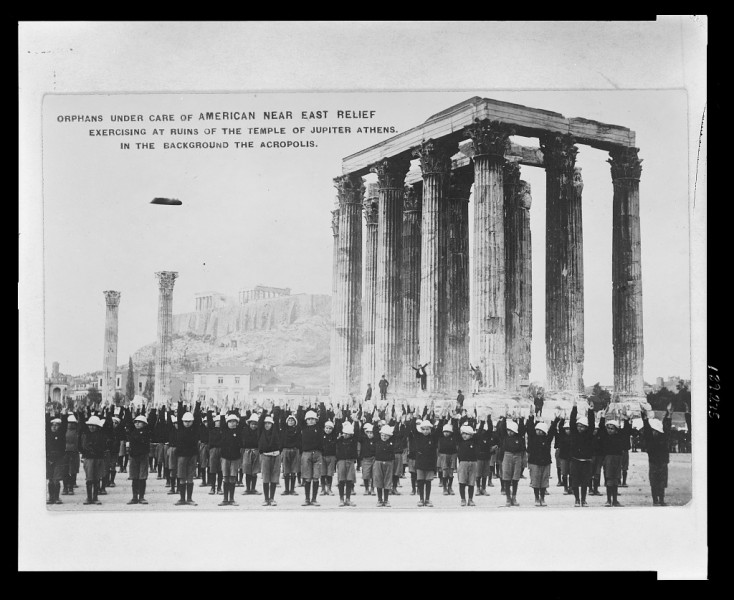 During my university experience, I have been busy and rushed, running to one activity after another. I am pursuing a double major in History and Classical Archaeology while at the same time taking heavy course loads to graduate early. The Michigan Library Scholars Program was the first time I was able to slow down to study and appreciate a historical event. It gave me the opportunity to develop a lot of different skills, and gave me the confidence to move forward into the working world next year.

We started off in May with a project work plan, although there was the implicit understanding that our timeline might vary. Our prompt was vague: our exhibit had to relate to the Greco-Turkish War (1919-1922). In my classes, I dealt with constraints in what I could talk about. It was liberating to be able to pick and choose what we wanted to include in the exhibit.

I underestimated the amount of work that was required to bring this exhibit to fruition. The goals for the internship were clear at the beginning, but it was hard to picture the volume of work before diving into it. There were definitely some difficulties along the way. I remember feeling frustrated early in the internship. I had done hardly anything but read, and was ready to move forward with creating the exhibit. Zachary, our mentor, reminded us not to put ourselves into a box too soon and to keep an open mind. This patience paid off. When Bennett and I drafted the exhibit, we ended up making almost identical outlines without consulting each other at all.

One thing we struggled with in creating this exhibit was in finding images. At the beginning, I pictured all sorts of interesting images, but it ended up being more difficult than anticipated. Many of the images we wanted to include were nonexistent. This is likely due to the one-party system in Turkey’s early years limiting freedom of speech and press. Greece also experienced political strife and controversies following the war. Coming to the end of this internship, I am grateful we were able to have photographs from the conflict because they provide a window into the events more than any painting or artistic rendition could.

The main skill I developed during this internship was delegating. There were times when Bennett and I discussed things about the exhibit without Zach’s guidance, and we were able to make some decisions completely on our own. I set up meetings with Bennett to make sure we were both on the same page, even outside of our meetings with Zach. I contacted Feyza Sayman, the Turkish Studies Specialist at the University of Michigan, who went out of her way to help us with Turkish place names. By the end, I felt like I was in control of the exhibit, and reaching out and coordinating with others was a good way to exercise some leadership skills. I also learned how to handle disagreements in a professional manner. I have really fine tuned my communication skills through this internship.

Our exhibit has great value in providing an example for handling delicate subject matter. Bennett, Zach, and I took great care in making sure we were being as culturally sensitive as possible when creating this exhibit. Greece and Turkey refer to some cities by different place names, especially those disputed during the conflict. Much of the scholarship on the war that has been translated into English unfortunately favors the Greek side, meaning that academics often default to the Greek names for cities regardless of their modern name. We maintained a consistent tone throughout the exhibit by using both place names for every city. Some might feel that it is a bit strange to use both, but we have made great efforts to be as equal as possible.

There really is not a “bad guy” to point to in the Greco-Turkish War. It would be easier to paint one side in a better light than the other, but both sides had legitimate reasons for keeping up the fight. I hope that our exhibit can inspire others to consider a more sensitive approach to conflicts with such blurred lines. The answer might not always be including different place names– perhaps it means discussing historiography or including terms from each side’s language where appropriate. I have never read another work that took the approach that we decided to go with, but I will be sure to pay more attention to these considerations in the future. Sensitivity to different cultures is the greatest contribution to the UM Library system that our exhibit has to offer.

When you are crafting an exhibit on a topic like this that much of your audience might not know much about, it gives you a lot of power to shape their perception of the narrative. I think curators have a responsibility to make sure that they are doing their best to present details in a way that is unbiased and fair to all sides of the story. We have done our best to do this here, and I hope that anyone who reads through our exhibit feels the same way.