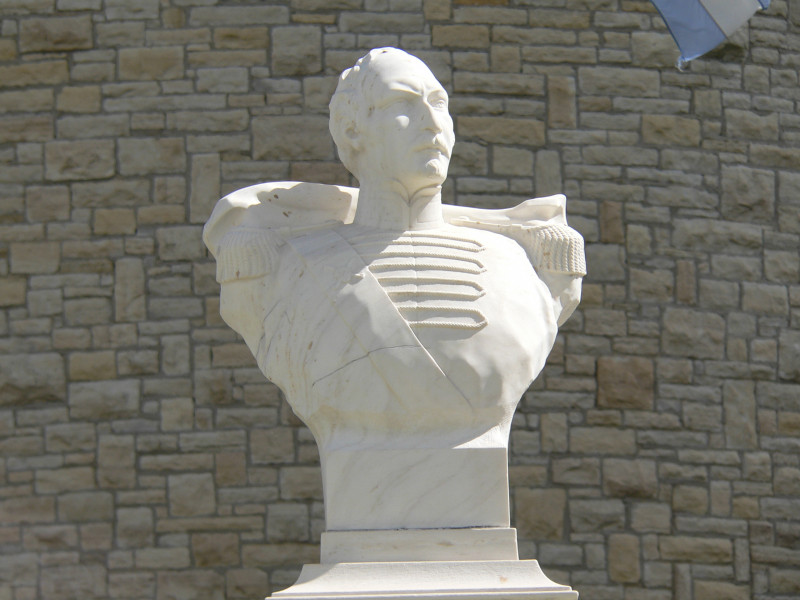 The first time I had ever even heard of the Greek War of Independence was when I was still in high school. I was attending a Model United Nations Conference at the University of Michigan, and a friend of mine was wielding a placard that definitely didn’t have the name of a country on it.

“Petrobey Mavromichalis.” He said matter-of-factly, as he had been studying his character for weeks beforehand.

“He was the leader of Maniots during the Greek Revolution. They saw themselves as kind of successors to the Spartans in a way.” My friend elaborated. 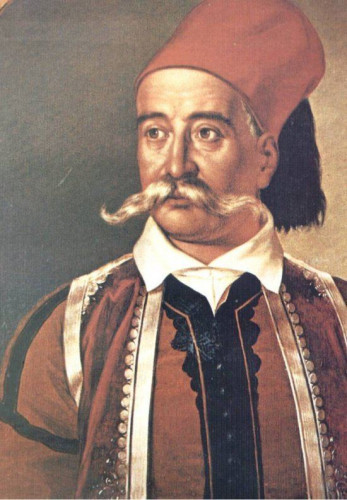 Petrobey Mavromichalis, the figure that would spark my interest in the Greek War of Independence

Something was very intriguing about this man with the incomprehensible name. The way my friend had framed him seemed like he was out of a different time, or at least he seemed that way. A swashbuckling Spartan with an enormous mustache and Turkish fez. Doing some more cursory research into the Greek War of Independence, I soon learned that the entire historical event had this strange dissonance to it. The reality of the early 19th-century Ottoman Empire clashed with a newfound nostalgia for the ancient past. The Greeks, as well as the international community, were in a way, building a new reality and identity for what would become Greece. As a History major, this unique way of interacting with the past fascinated me, and when I heard that the Michigan Library Scholars program was focusing on the Greek War of Independence as one of the topics, it was an opportunity I couldn’t let pass me by.

Before taking on this project, I had never done anything like the Michigan Library Scholars Program before. The previous university that I had just transferred from during the winter of 2020 didn’t really have anything like the program that was easily accessible. After being hired, I quickly learned who else I would be working with. My fellow intern William McClelland, and our mentor, Zachary Quint. I was excited to get working and grateful for the opportunity, but a lot was admittedly a little intimidating at first. There seemed like there was so much to do, and we had so few concrete ideas of how we wanted our exhibit to be structured, as well as what we wanted it to be about. For this, we came up with a solution, that being lots of research. We read, wrote, and discussed as much as possible until we knew enough about the Greek War of Independence to make a final decision. We would make an Omeka exhibit for the library with a focus on international perspectives during the war. As someone who is enamored with historical and modern relationships between different groups of people, I was thrilled with this outcome.

The homepage to the online exhibit I helped curate - "That Greece Might Still Be Free": Commemorating the Bicentennial of the Greek War of Independence from an International Perspective

Over the course of our project, I really felt as though I was honing skills that I could be using in a variety of settings in the future. For example, our online format this summer made clear and effective communication an absolute must. Besides the numerous meetings with Zachary, I found that out of all things, GroupMe and comments via Google Docs were the most effective ways to discuss the exhibit and our research. Apparently, you have to get creative with communication sometimes! Having the realization that accessibility was a major factor in making an online exhibit also had a big impact on me, as I began to look at my writing to make sure it was clear, and I used metadata so that the images in the exhibit could be described without being seen. Even some of my skills in the technical department saw improvements, as I learned how to better navigate and use the library’s online resources when looking for books and resources. Art, maps, and historical artifacts, I now know databases to find all of it. Learning how to use the program Omeka, to actually create the exhibit, was challenging at first too, but I was able to figure it out quickly after some coaching from Caitlin Pollock, Digital Scholarship Specialist at the library and now I can happily say that I am very comfortable with it.

Even my weaknesses were tested by my time as an intern. I’ve always been a person who has struggled with giving good advice. Be it peer-review for coursework, or anything else that has to do with giving quality feedback, I had always struggled with it. This was even true during the early stages of the internship, but I soon found myself becoming more and more comfortable making contributions. I personally think this was due to my mentor Zachary giving me opportunities to voice my opinion during meetings, which made me feel like a valued part of the team. From this, I was able to conduct more focused research, and give better feedback while editing. Without the welcome environment for sharing thoughts and opinions the internship gave, I would be much less confident in giving honest feedback than I am now.

Before being hired into the internship, it was safe to say that I had no idea how extensive the library here at U-M really is. If you can name a role, the library has someone to fill it. From map librarians to history, to Greek studies, I was able to meet a plethora of specialized experts. The pure scope of the library was immense, and it made me realize how many types of people are needed to run a library so huge. I have always liked the idea of having a job in which I could specialize in my interests, and the U-M Library is one avenue I could see myself going down.

The Michigan Library Scholars internship was also a perfect opportunity for me to forge connections. I was able to meet and talk to people that I would’ve maybe never had the confidence to talk to before. Everyone in the Scholars Program made me feel welcome, and like they had a genuine investment in the success of our project. I am incredibly thankful for all the support and learning experiences that those involved in this internship program gave me over these few months, as it was vital for me. I would also like to add that I hope the exhibit that Zachary, William, and I have made will be helpful and entertaining for anyone who wants to learn more about the Greek War of Independence, and its wide-reaching effects. Thank you to everyone who made this exhibit and experience possible. I couldn’t ask for a better introduction to U-M.