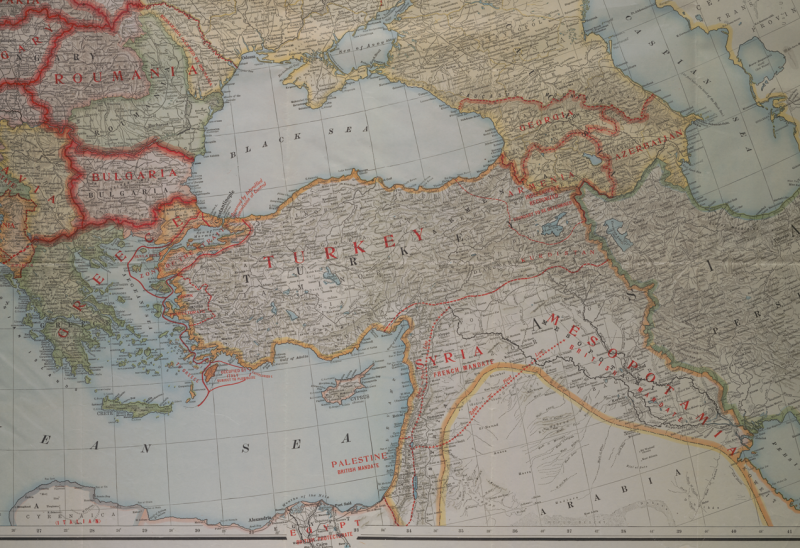 As I was looking for internship opportunities for the summer of 2022, the Michigan Library Scholars program immediately caught my eye, specifically the exhibit on the Centenary of the Greco-Turkish war. I had taken a history course on the First World War my sophomore year of college, and after the exam I was curious as to what happened next. This curiosity sparked an interest in the often under covered Interwar Period, and its conflicts like the Greco-Turkish war. Because of this I knew the basics on the Greco-Turkish war, and this internship program seemed like an excellent way to pursue this interest further while developing important skills for research and writing that would be invaluable as a history major.

This internship program revolved around making an exhibit related to the Greco-Turkish war, with the first half of the program focused on learning new skills and research, with the last half focused on solidifying ideas and creating the exhibit. One thing that helped this internship was the vast support network of the library, and the University as a whole. My fellow intern, Elaina Ryan, was excellent, and our ideas on the exhibit flowed together quite well. Similarly, our internship's history mentor, and librarian for Classical Studies and Modern Greek, Zachary Quint was great at communication and encouraged us to pursue our own ideas. Gabriel Duque, who helped to manage all the Library Scholars was also an immense help, and easy to approach with problems or concerns. Additionally, we were able to interview specialists to help with this project; like Will Strobel who helped us on trauma narratives in Greece and Turkey, and Feyza Sayman the Turkish Studies Specialist at the library. This strong support network helped immensely in my understanding of the material and the construction of the exhibit.

Another important aspect of the exhibit was accessibility, so that the exhibit could be easily understood by those using e-readers. Images need an appropriate description so that they can be pictured. For images that were pictures, or drawings of people and scenery this was not exceptionally difficult, but maps proved to be difficult. I found that describing where countries were in the image: center, top and bottom, left and right, was the best way to represent how the map looked.

Furthermore, ensuring that our material was easy to read and understand for an online audience who may not know about the topic was a paramount focus of this exhibit. The first two sections of the exhibit were primarily background information, and had to be cut down significantly from the original draft of the exhibit. I also wanted to put a focus on the language we used for disputed locations, such as  İzmir/Smyrna, due to the tension that still exists between Greece and Turkey on what term to use. This shift in perspective was not something I had to worry about when writing an essay for a class, but it is incredibly important for my career aspirations. The publication of any articles, essays, or theory, is all available to the public making the lessons of this internship indispensable.

The opportunity for the interns to control the direction of the exhibit was the greatest strength of this program, as it allowed the freedom to develop skills that are difficult to receive from more structured courses. During the first two weeks of research, we were encouraged to not pick out a central topic, which allowed me to gain a deeper understanding of the time period. Previously, I focused my essay planning around writing a thesis statement, then pursuing supporting evidence. However, sometimes I found myself boxed in by my thesis, and unable to compromise with the new evidence unless I started over on a whole new essay. This research process demonstrated that following the evidence is more important than defending your theory.

However, this freedom meant that it was very important to understand the biases of the sources that we collected. For example, the primary documents on the Greco-Turkish war were heavily skewed towards the Greek perspective, as they were the side that the Entente powers supported. Additionally, more Greek primary sources have been translated into English than Turkish sources, further contributing to this bias. To further complicate matters, both Greece and Turkey would exercise considerable control over the primary documents of the time period to help create their new national identities following the Greco-Turkish war. Before this internship I had mainly focused on analyzing the biases of a singular author, but the biases of contemporaries, academia, and historiography all need to be taken into account.

Interpretations of Atatürk stood out to me as being prone to both positive and negative biases.
Atatürk worked to reform the language, education, and stability of Turkey throughout his life; nonetheless, many of the tactics he used to construct the modern national identity of Turkey were dictatorial and insincere. Harsh treatment towards those who did not conform to the new Turkish identity, censoring the press, and rewriting history were common practices of Atatürk. Secondary academic sources tended to focus on one of these perspectives, making it difficult to understand Atatürk without a comprehensive bibliography. Other events like the burning of İzmir/Smyrna, and the Treaty of Lausanne also required a plethora of sources to eliminate the biases of authors leaking into our exhibit.

My time as a Michigan Library Scholar has been incredibly valuable to me, both for the skills I have learned and the connections I have made. I hope that this exhibit can help to educate readers on the Greco-Turkish war, as the academic scholarship on the topic has only come about in the last fifteen to twenty years. I am so thankful to all the people who helped make this exhibit transform from the thoughts of interns into a tangible and accessible exhibit, and the opportunities that this internship and the Michigan Library gave to me.