While considering the Michigan Library Scholars (MLS) Internship projects available in the early winter semester, the project titled A Dance for Mother Earth, A History caught my eye from the start. At the time, I wasn’t even aware of the annual Dance for Mother Earth Powwow in Ann Arbor, but ever since reading Winona LaDuke’s novel, Last Standing Woman, the year before, I became much more interested in learning about Native American culture from a non-colonial perspective. LaDuke’s own novel weaves together history, culture and the legacy of a family that spans over seven generations.

This is something that has always taken precedence in my studies. As a Korean Studies and Romance Languages & Literature double major, I think it is important that one doesn’t push their own perspective when learning about another culture (or language), but rather, taking a step back, and listening to others' stories is crucial for intercultural learning. The MLS project draws out the history of a Dance for Mother Earth’s annual powwow and presents its story in Hatcher’s North Entrance display cases, of how a small scale local powwow grew to be one of the largest, intertribal, student-led North American Powwows.

Right from the start, Allison (co-intern) and I were faced with quite a large hurdle: How do you begin constructing, or even researching, an exhibition you aren’t familiar with? Luckily, our wonderful mentors at the library were able to get us started. First, some introductory materials going over powwows and indigenous culture, then choosing topics of interest to research further. Before we knew it we had built our own mini collection of Indigenous music, books, and artwork in an office in Hatcher. Besides the reading and research, we reached out to interview community members, such as Andrea Wilkersons who works at MESA (Multi-Ethnic Student affairs) and closely with NASA (Native American Student Association) in planning the Dance for Mother Earth Powwow. Talking to Andrea W. was something we could not only include in our exhibition, but it was also a great reference point for our research and building further connections.

We also made an appointment to visit the Bentley Historical library in order to view some older archived materials. Some of the material, like scans of the covers of past powwow programs, were incorporated into one of the display cases. By displaying the past programs we were able to show the progression of the powwow over the years, and include the various visual designs of the programs. While the Dance for Mother Earth Exhibition was originally meant to focus on the history of the Ann Arbor Powwow, both Allison and I wanted to incorporate modern and current aspects of Indigenous culture. In the midst of our research, we kept referencing many amazing resources we wanted the students at the university and patrons visiting the library to be aware of. With the hopes of combating the perception that indigenous culture is a thing of antiquity, we began to incorporate more modern aspects or resources into the exhibition design. 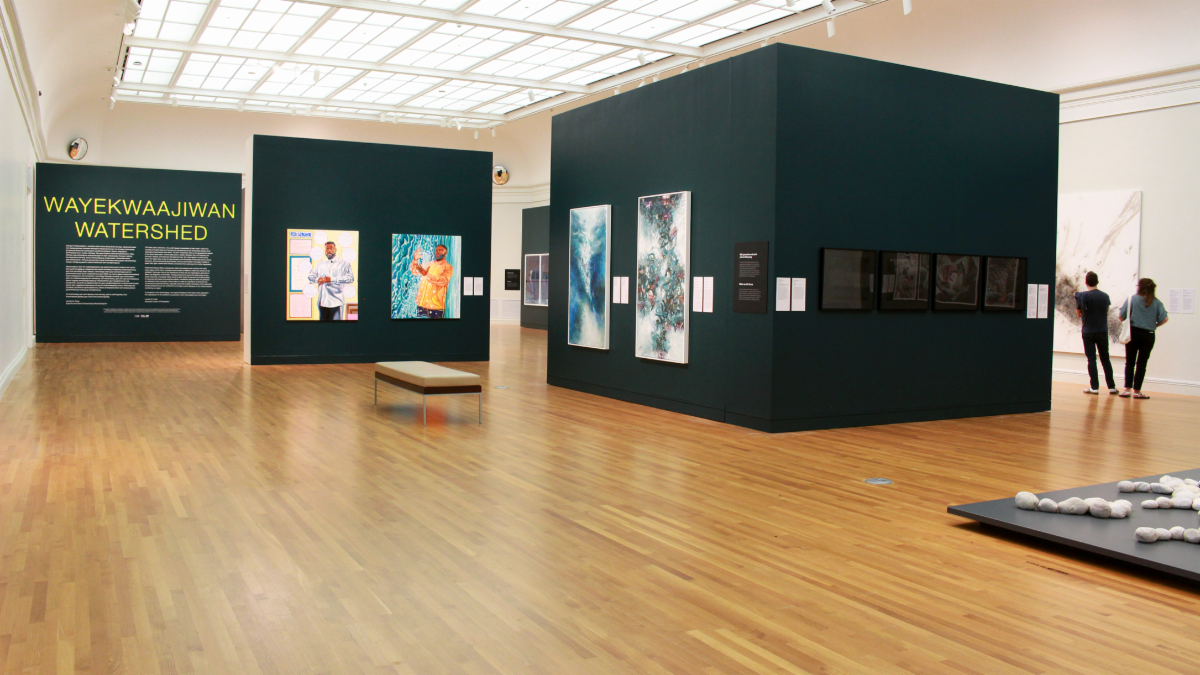 Visual graphic for Ojibwe language class at the University of Michigan

Some of the resources that we researched that are in connection with the University of Michigan included: student organizations, classes available in the upcoming fall semester, Native American studies programs, UMMA exhibitions, library research guides and more. Outside of the campus sphere, we included information on the indigenous music festival in Detroit, Vibe with the Tribes, visual artists, recipe books, information on the 12 federally recognized tribes of Michigan, and various indigenous authors and activists. This project not only allowed me to become more familiar with what is happening on campus, but also the broader Ann Arbor, and Michigan, community as a whole.

Due to the nature of research being more text-heavy and literary-based, I wanted to incorporate some visual motifs into some of the displays in order to break up the text. The idea originated as I was researching Indigenous visual artists, and more specifically as I was focusing on the significance of beadwork in indigenous cultures. If one attends a powwow, there is sure to be many gorgeous beadwork designs to be found! I connected the visual appearance of beadworks (dots, or circles) with native plants and ecosystems. As one of my mentors (Ariel Ojibway) explained to me, the plant motifs found in beadwork reflect where one comes from. Plants native to the Michigan region such as goldenrod, blueberries, pine, maple and corn were then created into the pointillism motifs found throughout the exhibit.

To wrap up, building the Dance for Mother Earth Powwow Exhibition through the Michigan Library Scholars program was a wonderful opportunity to apply many skills, such as project management, graphic design, illustration, exhibition planning and designing, interviewing skills, connecting with community members, research and much more! Beyond the technical skills acquired, this opportunity allowed me personally to learn more about indigenous culture, even tying it to my own roots in Latin American, and improve my cultural fluency. My hope is that the viewer of the exhibit will also have a positive experience viewing the display, and learn more about inigenous culture and current issues. Hopefully, even encourage people to check out the next Dance for Mother Earth Powwow in March!

Corn motif created by me (Andrea Medina) for the display