The Kamada Collection: Poetry and the Hyakunin isshu

This collection was originally compiled by the courtier and poet Fujiwara no Teika (1162-1241) in Kyoto. One of the most well-known poetry anthologies in Japan, it aimed to represent the long history of Japanese poetry from the seventh century until Teika’s time and features the work of many highly regarded literary figures.

The image below is from a manuscript entitled Jokyō Hyakunin isshu takarabako 女教百人一首宝箱, or Treasure Box of Women’s Learning of Hyakunin isshu. Published in Osaka in Meiji 24 (1891), it was likely a poetry primer intended for women. 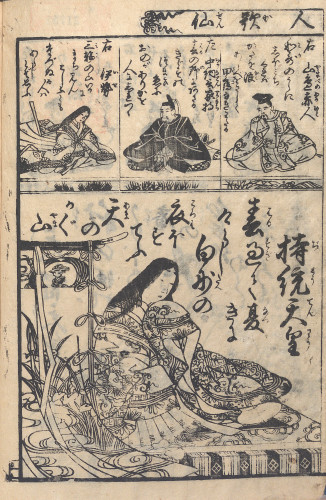 This collection of Hyakunin isshu poems is copiously illustrated with imagined portraits of each poet. The largest figure in this image is meant to be Emperor Jitō (r. 686-697), the third female emperor of ancient Japan. The text on the far right reads “Jitō Tennō,” identifying her as the composer, followed by the poem:

Spring has passed, and

it appears that summer has arrived.

where they dry robes

of the purest white.

Above the main image and poem there are complementary images and poems by other famous figures, such as Yamabe no Akahito and Ōtomo no Yakamochi. The poems featured here are other well-known compositions by these authors that are not part of the Hyakunin isshu collection.