In our last post, on poetry-related works in the Kamada Collection, we introduced illustrated manuscripts of the famous poetry collection Hyakunin isshu 百人一首, or One Hundred People, One Poem Each, an anthology of Japanese poetry from the seventh to thirteenth centuries compiled by the courtier and poet Fujiwara no Teika (1162-1241). An incredibly popular collection, Hyakunin isshu inspired numerous alternate versions and parodies. We will introduce two such manuscripts below.

The first is Kyōka Hyakunin isshu 狂歌百人一首, or Comic Hyakunin isshu. The text was produced at the end of the Edo period in Kaei 7 (1854) and consists of two volumes. Its content is primarily parodies presented as full-page poem portraits, often with entertaining elements, such as an image of the poet leaning over his desk agonizing over his words. Note the discoloration of the paper, which may be from its frequent use over the years and/or lapses in preservation prior to its acquisition. 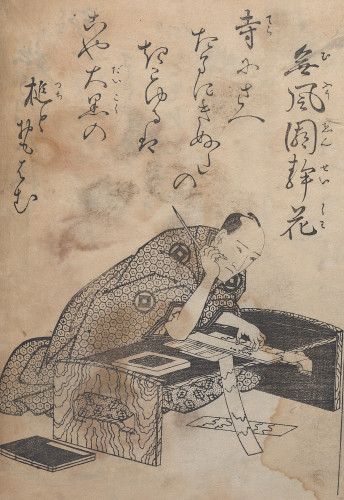 The next manuscript, Shibai Hyakunin isshu 芝居百人一首, loosely translated as One Hundred People of the Theatre, One Poem Each, parodies Hyakunin isshu through performance portraits. As seen below, the bold facial expression on the character’s portrait echoes kabuki stage makeup. 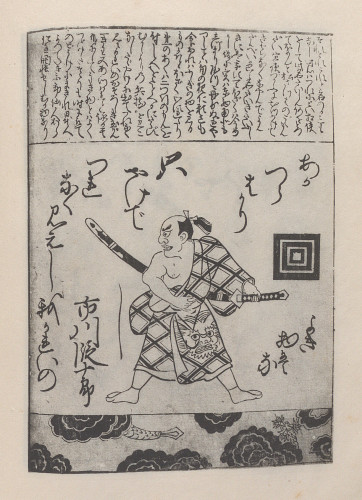 Originally illustrated in Genroku 6 (1693) by Torii Kiyonobu (ca. 1664-1729), an Osaka ukiyo-e painter and printmaker, the copy held in the Kamada Collection is actually a Taishō 3 (1914) photographic reproduction of the original manuscript. The cover of the manuscript is also beautifully designed--colorful and featuring an ichimegasa 市女笠 pattern. Ichimegasa were a type of straw hat often worn by traveling noblewomen in premodern Japan. If you look carefully at the closeup of the cover, you will see tiny white flecks--the paper of the cover has been produced with a shiny mineral that makes it sparkle ever-so-slightly. 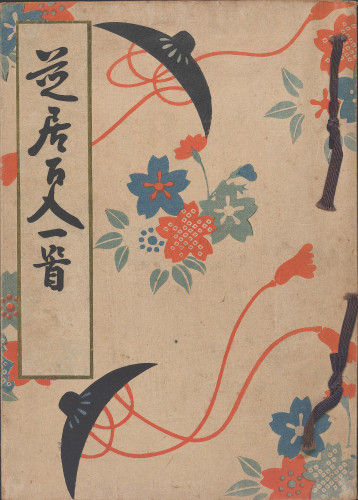