In our last post on the Kamada Collection, we showcased nineteenth-century images related to warriors of the fourteenth century. This week, we will continue with an earlier manuscript of a more practical sort. The following illustrations come from the two-volume Heihō yūkan 兵法雄鑑, sometimes translated as The Paragon of Military Strategy. According to the preface, this text was originally written in Shōhō 2 (1645) by the shogunal retainer Hōjō Ujinaga (1609-1670), who trained in the Kōshū school of military tactics.

The publication dates of our copy of Heihō yūkan are unclear, but based on the manuscript style and condition, it may be a late Edo or early Meiji period copy. The images, both black and white as well as color, look to be hand-painted, and the manuscript was copied by hand.

The text includes a variety of information for warriors on military life, from the basic preparation of food and arms to methods of siege warfare like compromising water sources and setting strategic fires. The image below shows two warriors and a bonfire. 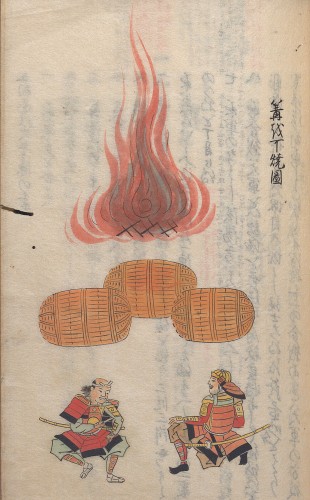 Illustrations are interspersed throughout the text and also include diagrams of castle layouts, architectural features of residences and castles, flags, fans, drums, and other relevant tools of warfare.

The image below appears to be a playful illustration of a dragon alongside the word jōja 常虵 (literally “eternal snake”). This is a type of battle formation that cleverly situates front and rear units under attack in unexpected ways. Perhaps for this reason, the dragon in this image coils around a mountainside. 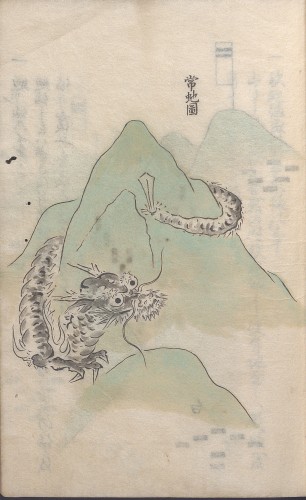