This week and next we are featuring images from Kamada Collection texts related to warriors. Previously we posted illustrations related to premodern theatre performance; the ones here are from a late Edo manuscript published in Genji 1 (1864), Nanchō taihei chūshin ōrai 南朝太平忠臣往来. Although there are few images in this text, the beginning of the manuscript contains several beautifully printed and colored illuminations such as the one below. 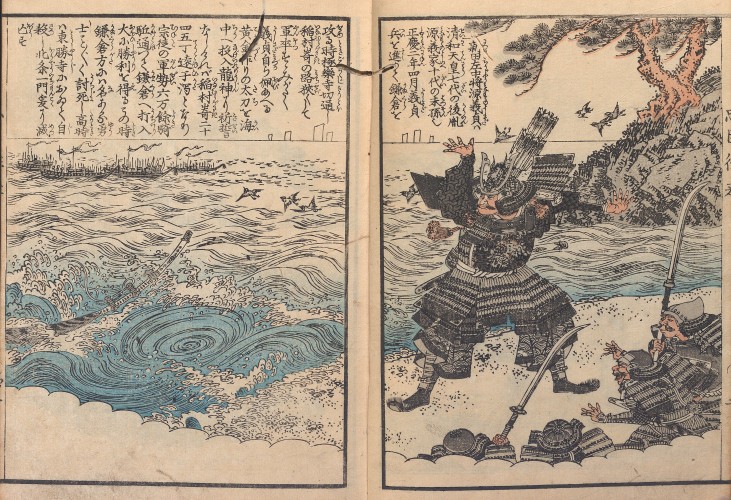 The title Nanchō taihei chūshin ōrai can be roughly translated as Book of the Loyal Retainers of the Southern Court, referring to the fourteenth-century political factionalism that resulted in a split of the imperial court into the Northern and Southern Courts.

The figure featured in this image is Nitta Yoshisada (1301-1338), who, in attempting to attack Kamakura by water, purportedly tossed his sword into the sea at low tide and prayed to the deity of the sea, who parted the waters for him. The text above the image narrates the scene for the viewer, including readings for the kanji characters.

The image below, also from Nanchō taihei chūshin ōrai, is of Kusunoki Masatsura (1326-1348), a staunch military supporter of the Southern Court and its leader, Emperor Go-Daigo. This image shows Masatsura composing a death poem on the doors of Nyoirin Temple, the location of Emperor Go-Daigo’s tomb. 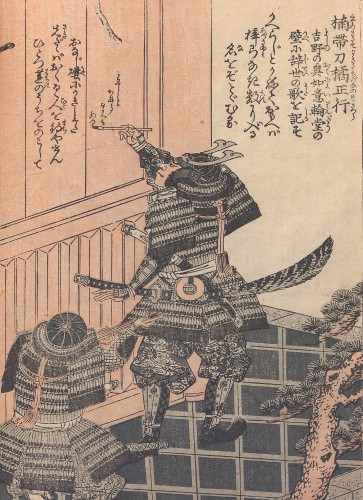