In our last post, we discussed Asia Library’s purchase of more than 20,000 volumes from the Kamada Library in Sakaide, Kagawa Prefecture, and highlighted a couple of items from the collection. This time we are featuring two more texts related to the traditional performing arts.

The first is Kyōgenki 狂言記, a six-volume series collecting kyōgen scripts, published in Ōsaka in Kaei 1 (1848). Kyōgen, a form of traditional comic theater, was typically interspersed between acts of (more sober or somber) noh performances. 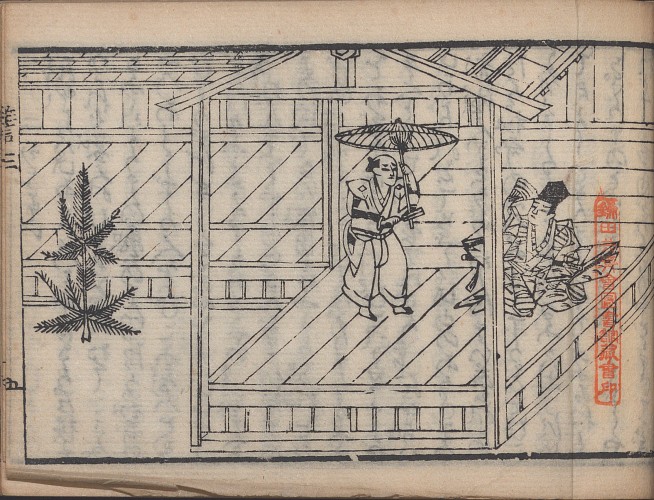 Collections of kyōgen scripts began to be published in the late seventeenth century, and the postscript of this set dates it as a nineteenth-century reproduction of a 1699 publication. Each volume of Kyōgenki  is approximately 16.2 x 2 x 11.2 cm, making it easy to flip through or carry. Scripts of the plays are followed by black and white illustrations of a scene from the performance. The image above is from Suehirogari 末広がり, a play about a daimyo who sends his servant to the capital to buy a fan for him, but as a result of many miscommunications, the servant returns with an umbrella. 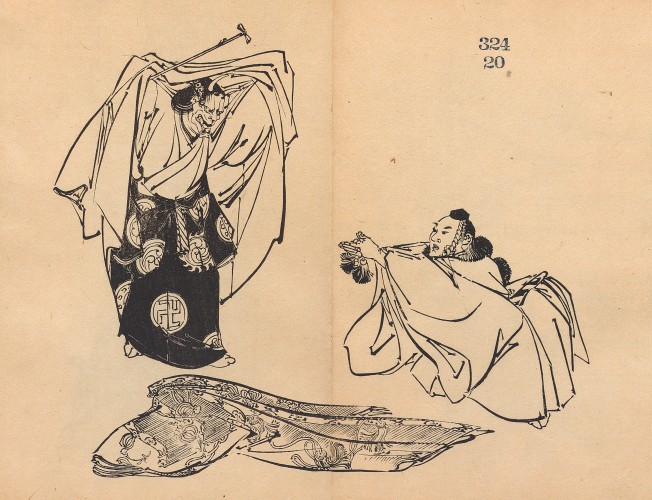 The image above is from the Nōgaku zue 能楽図絵 booklets of the Kamada Collection. These two volumes were published in Meiji 32 (1899). Much like the Kyōgenki, these books are small and easy to carry. Each sheet of paper is bound accordion-style and depicts a scene from noh theater, a form of medieval drama that developed in the fourteenth century.

This scene is from Aoi no Ue, a play based on one of the most influential pieces of Japanese literature, The Tale of Genji  (c. 1008) by Murasaki Shikibu. The story follows the life and many amorous affairs of a nobleman, Prince Genji. In this scene, Rokujō, a jealous lover of Genji, has manifested as a vengeful spirit and attacks Aoi, Genji’s wife (represented on stage by a kimono). A Shugendō ascetic praying over Aoi confronts Rokujō's raging spirit. He eventually calms her spirit and enables her to reach enlightenment.