Unlike most other large East Asian libraries in North America, the University of Michigan’s started its collection with materials related to Japanese rather than Chinese Studies. This approach was the direct result of U-M's hosting the U.S. Army’s Japanese Language School during World War II. In 1947, Michigan became the home of the Center for Japanese Studies, North America’s first such interdisciplinary institute. The Far Eastern Library, as Asia Library was called until 1959, was established in 1948, just one year later. In October 1950, the library made a significant addition to its newly formed collection by purchasing nearly 20,000 volumes from the Kamada Library in Sakaide, Kagawa Prefecture. The books had been part of the personal collection of Kamada Library founder Kamada Katsutarō. At the time, the Kamada Library was being converted into a museum. It still exists in that form as the Kamada Kyōsaikai Hakubutsukan.

The books purchased included some 1,200 published before 1868. As can happen in libraries, some of these ended up in a closet and remained uncataloged over the years. But this academic year, we were able to hire Paula R. Curtis, who recently received her PhD from the U-M Department of History, to help us finish the inventory of these works. In this post and subsequent ones, we will show you a small sample of some of the more interesting illustrations that appear in works from this collection. Many thanks to Paula, who also wrote all of text that accompanies the illustrations.

The Kamada Collection contains a number of fascinating texts related to performance. The Bugakuzu 舞楽図 from Meiji 38 (1905) features two volumes of painted illustrations of costumes and masks from bugaku, a type of classical Japanese court dance that has been in existence since at least the Heian period (794-1185). In the images below, the labels indicate which dance is being performed, as well as the number of dancers who participate. First is the costume of Ranryōō 蘭陵王 (Prince of Lanling), meant to represent a sixth-century Northern Qi Dynasty ruler who wore a frightening mask in battle to terrify his enemies. Below that is the kochō 胡蝶, or "butterfly" dance, which is typically done by four child dancers. 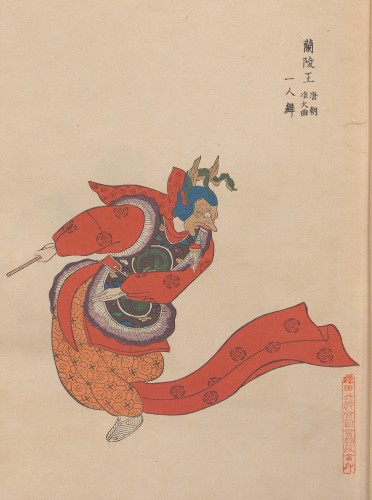 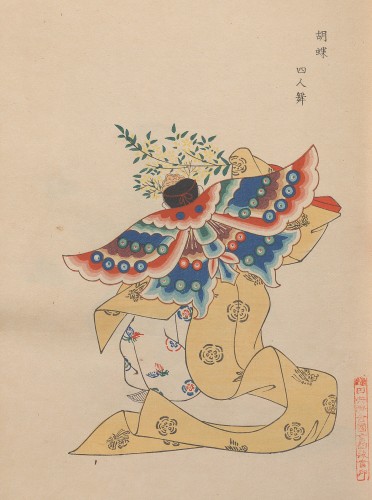