The image below is from the Jūhachi rakan zusan 十八羅漢図讃 or Illustrations of the Eighteen Arhats. This slim volume was printed in Kyoto in Jōkyō 4 (1687). 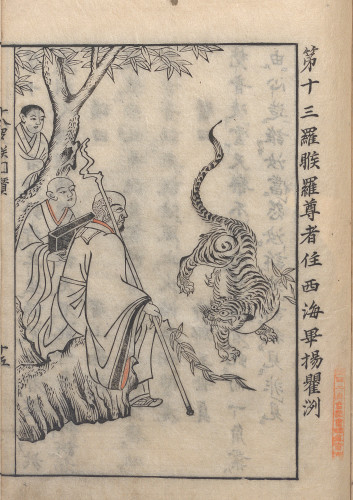 According to Mahayana Buddhism, the Eighteen Arhats are the original followers of Gautama Buddha, all of whom reached a state of nirvana. They are presented in various ways across South and East Asia, and in Japan are often depicted in connection with Zen monasteries. The image seen here is of Rahula, the son of the Buddha. Though imagery of him is not consistent, he is sometimes shown as holding a staff with a tiger or a lion before him. In the Jūhachi rakan manuscript each arhat has a full-page scene like the one above, accompanied by explanatory text on the opposite page.

The Kamada Collection also features a number of sutra reproductions. Below is a photograph of the Kongō hannya haramikkyō 金剛般若波羅密経, or The Perfection of Wisdom Diamond Sutra  (in Sanskrit, Vajracchedikā Prajñāpāramitā Sūtra). 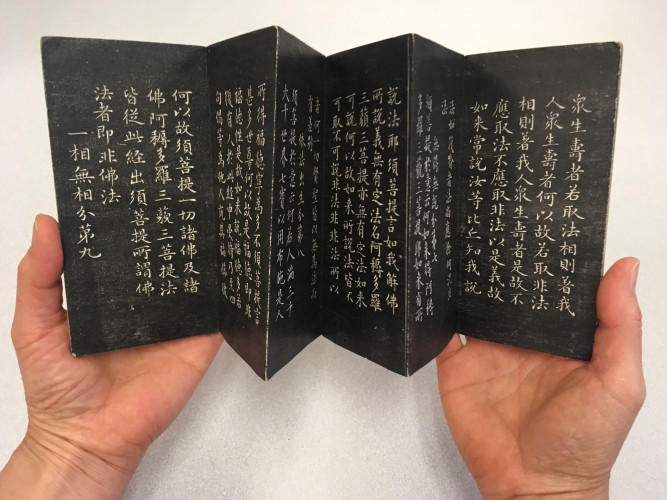 The Diamond Sutra was originally composed c. 2nd-5th centuries BCE, and its content focuses on professing the emptiness of all things. This copy has been created in black with the text in white relief. Unlike many of the other texts we have introduced, there are no accompanying illustrations. It was printed in Meiji 10 (1877) in orihon 折本 format, an accordion-like style of text that, in this case, makes it very easy to hold and use the sutra.