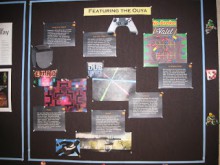 The Search for Feeling

Our student worker Mike Lynch explores the human search for feelings in all aspects of life - and specifically, in video games.

Game-related events in the Duderstadt Center

Here is the list of most popular games played in the archive during the month of September. A lot of old favorites top the list, along with a few new games, including Madden NFL 25 and NCAA Football 14.