The News in Today’s World: Journalism, Social Media, Fake News, and their Impact on Our Society 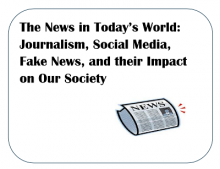 The April display of Undergraduate Library books in the Shapiro Lobby is focused on news. We have selected books on journalistic ethics, the impact of social media on news, "fake news," and books about reporting of specific types of events or topics.

In Search of Gaming's Worst

Jon Irwin of the blog Kill Screen has done an interview with our own Dave Carter that accentuates the archive. In the interview, they discuss the importance of studying not only great and popular games, but learning the history of and learning lessons from the worst games out there as well.