The Digital Public Library of America (DPLA) has collected and made searchable a vast quantity of metadata from digital collections all across the country. The Michigan Service Hub works with cultural heritage institutions throughout the state to collect their metadata, transform those metadata to be compatible with the DPLA’s online library, and send the transformed metadata to the DPLA, using the Combine aggregator software, which is being developed here at the U of M Library.

Meta-munging with hammer and file 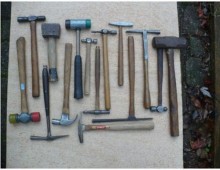 Paul Schaffner gives an introduction to batch editing metadata using tools that have worked well for him as part of his role in the Text Creation Unit (TCU) within the University of Michigan Library's Digital Content and Collections Department. The instructions and guidance provided, while originally aimed at cataloguers, can be utilized by anyone by following along with Paul's instructions and referring to the suggested resources and links within the article.