The Venetian Betrayal is the third book in Steve Berry’s series of thrillers featuring Cotton Malone, a former Justice Department agent turned rare book dealer based in Copenhagen.  It is not necessary to read the series in order (I have not), since each book stands alone, but Cotton’s character develops throughout the series, and his relationships with other regular characters evolve.  These include his friends Cassiopeia Vitt, a Spanish Muslim who is HIV-positive, Henrik Thorvaldsen, a Danish museum owner, and Stephanie Nelle, Cotton’s former boss at the Justice Department.

Although set in the present day, Berry’s thrillers usually contain a strong historical element, and this is no exception.  The Venetian Betrayal focuses on the search for the long-lost tomb of Alexander the Great.  The villain of the book is Irina Zovastina, the Supreme Minister of the fictional Central Asian Federation, a nation formed when several former Soviet republics joined together.  Zovastina has brought stability to her country, and is a very popular leader, but she is power-mad and set on destroying neighboring countries through biological warfare.  She is obsessed with Alexander the Great and wishes to conquer his former empire for her own country.  Legend has it that a cure for many illnesses, possibly including HIV, is to be found by Alexander’s tomb, and Zovastina wants to find it, because when she conducts her biological war, she does not want her own people to be infected.

At the beginning of the book, Cotton barely escapes from a fire in a museum of antiquities in Copenhagen.  It turns out this is one of a series of fires, and the sites all have one thing in common: they are each the location of a medallion to commemorate a battle between Alexander the Great and warriors mounted on elephants.  There are only eight “elephant medallions” known to exist.  Supposedly they contain a clue to the location of Alexander’s tomb and the healing draught that lies beside it.  Zovastina, of course, is after the medallions, and Cotton and his friends try to stop her and find the tomb and the cure for HIV before she does.  An important clue lies in Venice, the location of one of the medallions, and some of the most thrilling scenes in the novel take place there, in the Basilica San Marco and the piazza around it.  One legend says that the body of St. Mark, which Venetian merchants smuggled out of Alexandria, is not St. Mark’s at all, but the body of Alexander the Great.  Alexander’s body disappeared from Alexandria at around the same time St. Mark’s reappeared there.  Is there any truth to this legend?  We will never know, of course, but the possibility is intriguing.

As always with Berry’s thrillers, The Venetian Betrayal is action-packed and full of twists and turns in the plot.  Zovastina is a compelling villain, and she’s not one-dimensional.  There are times you feel for her when you read about her tragic childhood.  But, at the same time, you hope that Cotton and his friends will defeat her.  The information about Alexander the Great, and about Venice, is fascinating.  Berry provides an author’s note to tell the reader what is fact and what is legend.  Some of the plot turns might seem unbelievable at times, with characters you think are dead turning out to be alive, but that is typical for the genre.  I highly recommend The Venetian Betrayal for fans of thrillers, and for people interested in Alexander the Great or Venetian history.

The Venetian Betrayal can be borrowed from the Hatcher Graduate Library. 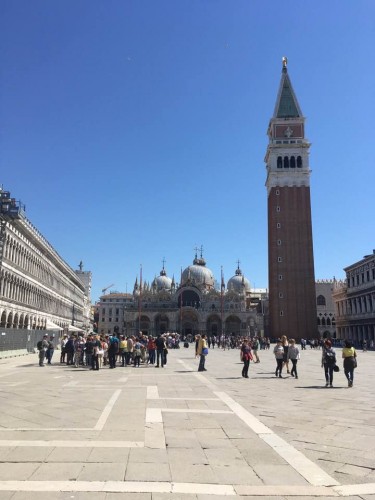 Here is a picture I took during my recent trip to Venice, of the Basilica San Marco and the piazza around it, site of some of the most thrilling action scenes in The Venetian Betrayal.