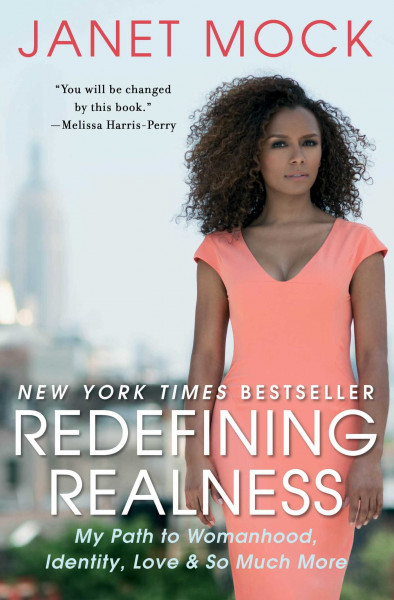 Observe Transgender Awareness week (November 13-19) this year by checking out transgender memoirs in the library's collections.

Redefining Realness: My Path to Womanhood, Identity, Love and So Much More by Janet Mock.

"This powerful memoir follows Mock’s quest for identity, from an early, unwavering conviction about her gender to a turbulent adolescence in Honolulu that saw her transitioning during the tender years of high school, self-medicating with hormones at fifteen, and flying across the world alone for sex reassignment surgery at just eighteen. With unflinching honesty, Mock uses her own experience to impart vital insight about the unique challenges and vulnerabilities of trans youth and brave girls like herself."

Crossing: A Memoir by Deirdre McCloskey

"Crossing is the story of McCloskey’s dramatic and poignant transformation from Donald to Dee to Deirdre. She chronicles the physical procedures and emotional evolution required and the legal and cultural roadblocks she faced in her journey to womanhood. By turns searing and humorous, this is the unflinching, unforgettable story of her transformation—what she lost, what she gained, and the women who lifted her up along the way."

Becoming Eve: My Journey from Ultra-Orthodox Rabbi to Transgender Woman by Abby Stein

"The powerful coming-of-age story of an ultra-Orthodox child who was born to become a rabbinic leader and instead became a woman."

"Written by a leading activist in the transgender movement, Becoming a Visible Man is an artful and compelling inquiry into the politics of gender. Jamison Green combines candid autobiography with informed analysis to offer unique insight into the multiple challenges of the female-to-male transsexual experience, ranging from encounters with prejudice and strained relationships with family to the development of an FTM community and the realities of surgical sex reassignment."

Trans: A Memoir by Juliet Jacques

"In July 2012, aged thirty, Juliet Jacques underwent sex reassignment surgery—a process she chronicled with unflinching honesty in a serialised national newspaper column. Trans tells of her life to the present moment: a story of growing up, of defining yourself, and of the rapidly changing world of gender politics."

Man Alive: A True Story of Violence, Forgiveness, and Becoming a Man by Thomas Page McBee

"If he is to become a man, what sort of man should Thomas Page McBee be?

To find out, McBee must confront the suffering he has endured at the hands of men: the abuse he endured as a child from his father, and the violent mugging which almost killed him as an adult. Standing at the brink of the life-changing decision to transition from female to male, McBee seeks to understand these examples of flawed manhood, and reclaim his body on his own terms.

Powerful, uplifting and profound, Man Alive is a story about transformation; about freedom, and love, and finding the strength to rebuild ourselves as the people we are meant to be."

The Testosterone Files: My Hormonal and Social Transformation from Female to Male by Max Wolf Valerio

"Max Wolf Valerio crafts a raw, gripping, and poetic account of life before, during, and after injecting testosterone. Valerio's detailed observations about a lesbian transitioning from female to a heterosexual male highlights the physical and emotional differences between women and men, and alternately challenges and confirms readers' assumptions about gender."