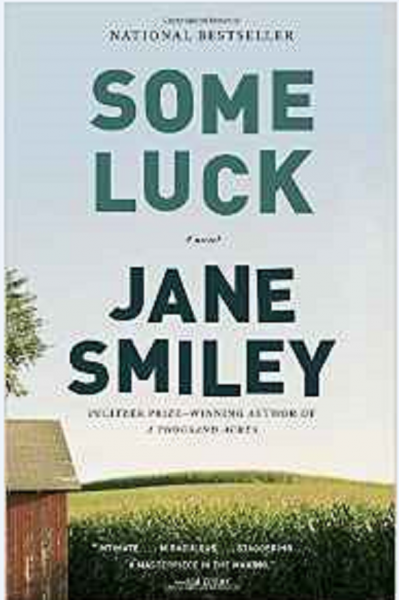 Some Luck is the first of a trilogy by Pulitzer Prize winning author, Jane Smiley.  The story follows an Iowa farm family, the Langdons, from 1920 through 1953.  There is a separate chapter for each year and they are in chronological order (none of the jumping around in time you sometimes see in books).  The story starts off in post-WWI 1920 with young married couple Walter and Rosanna Langdon and their infant son, Frank.  Each chapter/year includes several brief sections that are told from the perspectives of various family members, including the infants and toddlers, though fortunately there are few of those sections -- just enough to give a view of the world from the baby's eyes.

The story progresses from those early post-war years, through hardships of the depression and poor crop years, more children, deaths of grandparents and babies, school days, college, World War II, and the early post WWII years, including the early days of McCarthyism and spy hunting.   Most of the story centers around farm life, but as the children grow and venture away from home, the story follows them to new places and people.

Not an action filled novel or even really a story about anything in particular, this is a nice glimpse into daily life, the ups and downs of a long term marriage, the heartbreak of death, and the joys and struggles of daily life across much of the 20th century.  Along the way those of us too young to remember the 1920-early 1950s learn about changes in health care, rural electrification, small town schools, the Red Scare, and transition from horse pulled plows to tractors.