Shadows in Bronze is the second in Lindsey Davis’s popular series of mysteries featuring the wisecracking ancient Roman private eye Marcus Didius Falco.  The emperor Vespasian has recently come to the throne after a civil war in which four emperors quickly succeeded each other and came to bloody ends.  He does not yet feel secure on the throne, and he hires Falco to track down members of a conspiracy against him.  Falco thinks Rome should be a republic, but he reluctantly serves Vespasian because he needs the money in order to rise to the equestrian (middle) class so that he can marry Helena Justina, the senator’s daughter who stole his heart in the first book of the series.

When he’s called on to dispose of a corpse in a warehouse, he realizes that the body is that of Helena’s uncle, who was one of the conspirators against Vespasian.  A freed slave of Helena’s ex-husband, also a member of the conspiracy, pursues Falco to his home with murderous intentions.  Falco escapes, but the freedman commits another murder.  Vespasian then sends Falco to the south of Italy to find the killer and to track down the remaining conspirators.  Falco travels with his nephew Larius, an aspiring painter, his best friend Lucius Petronius (“Petro”), who is a member of Rome’s police force, and Petro’s family.  Davis’s descriptions of the towns of southern Italy, including Pompeii, bring the places to life, and I love Falco’s sense of humor: “A place that intends to last!” he says of Pompeii.  This was eight years before the eruption of Vesuvius.  Along the way, Falco meets up with Helena at the villa belonging to her ex-husband’s adopted father, but her attitude toward him has cooled.  Can Falco win back Helena’s love and foil the conspiracy?

Davis’s descriptions of everyday life in ancient Rome are wonderful and make you feel as if you were living there.  The book keeps you on the edge of your seat with suspense as Falco tracks the killer through southern Italy and then back to Rome.  There is a thrilling horse race at the Circus Maximus and a final confrontation that lives up to expectations, with a very satisfying conclusion.  You will want to read all of Falco’s adventures, but it’s probably best to start with the first, Silver Pigs, where Falco first meets Helena.

Shadows in Bronze can be borrowed from the Shapiro Undergraduate Library.  If you know German, or if you're learning German, it might be fun to take a look at the German translation, Bronzeschatten, which is available from the Buhr Shelving Facility. 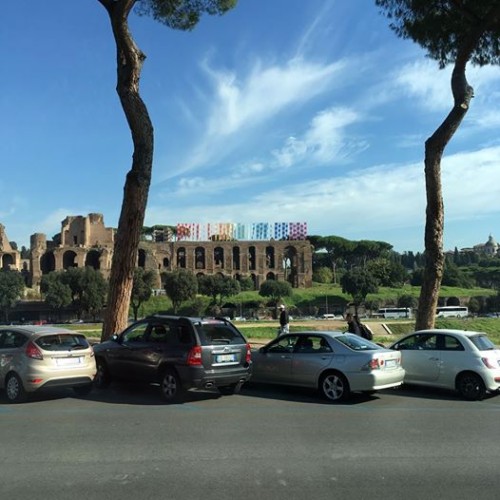 The Circus Maximus in Rome is the setting for one of the most thrilling scenes in Shadows in Bronze.  This is a picture I took during my recent visit to Rome.