Vincent Sheean’s historical novel Sanfelice was originally published in 1936.  It is set in Naples, Italy, in the 1790s, during a period when revolutionaries sympathetic to the French Revolution briefly overthrew the King and Queen of Naples, Ferdinand and Maria Carolina, and set up a short-lived republic.  The setting will be familiar to readers of Susan Sontag’s The Volcano Lover, and Sanfelice includes many of the same characters, including British Admiral Horatio Nelson and his mistress Lady Hamilton, wife of the British Ambassador Sir William Hamilton and confidante of Queen Maria Carolina.

The heroine of Sheean’s novel is Luisa Sanfelice, an impoverished noblewoman in her thirties.  She’s been married to a distant cousin, Andrea Sanfelice, since she was very young, but her husband is a spendthrift and the king and queen have confiscated his estate because he’s so deeply in debt.  To avoid debtors' prison, Andrea has gone to live in a monastery, and Luisa has spent most of her time in a convent.  When the novel begins, they have not seen each other for years, and it’s obvious that any love that once existed between them is dead.  Luisa’s mother summons her back home and asks her to attend a ball in honor of Nelson, so she can ask Lady Hamilton to plead her case with the queen.  Luisa does so, and obtains an audience with Maria Carolina.  But shortly before she sees the queen, Luisa goes to the salon of poet and journalist Eleonora Fonseca Pimentel, a revolutionary sympathizer.  The queen learns of this visit, and when Luisa comes to see her about recovering her husband’s estate, Maria Carolina abuses her viciously, accuses her of being a revolutionary, and absolutely refuses to give her the estate back.  Maria Carolina, who is depicted very negatively here, was the sister of Marie Antoinette, and was terrified of sharing her fate, so she had a horror of anyone who appeared to favor the revolutionaries.

After her rejection by the queen, Luisa continues to visit the revolutionary salon, even though she herself has no strong political beliefs, and there she falls in love with Fernando Ferri, a young lawyer and revolutionary.  When the king and queen declare war on France, horrific violence erupts in the streets of Naples.  The common people of Naples, unlike those of France, were very much on the side of the king and queen.  It was really just a small group of impoverished nobles and intellectuals who supported the revolution.  To protect Fernando from the violence, Luisa hides him in the home of her distant cousin, the Duke of Lauriano, a royalist who is also in love with her.  When the revolutionaries win the battle and the king and queen go into exile in Sicily, Lauriano goes with them, unaware that Luisa is hiding her revolutionary lover in his house.

Meanwhile, a royalist officer named Gerardo Baker, a Neapolitan whose family is of British origin, has also fallen in love with Luisa.  He plots to overthrow the new republic and win Naples back for the king and queen.  Baker returns to Naples in disguise as a friar and gives Luisa a safe-conduct which will allow her to leave the city unharmed.  Knowing that the royalists are plotting a return, Luisa goes to warn Fernando and gives him the safe-conduct.  But he shows it to the revolutionary government and they unravel the plot.  By her inadvertent betrayal of the royalists, Luisa becomes a heroine for the republic.

But the republic is very short-lived.  After horrific atrocities on both sides—Sheean’s descriptions of them are not for the squeamish—the royalists re-take Naples with the help of Nelson’s ships, and the revolutionaries are brutally put to death.  I will not give away what happens to Luisa, but it’s easy enough to look up, and anyone familiar with this period will know not to expect a happy ending.

Sheean’s novel is a compelling read, even though there is more narrative by the author than is commonly found in today’s historical novels.  At times it reads more like a history book than a novel, but that did not bother me.  He draws the reader into the world of 18th century Naples, and his characters come alive, even though his descriptions of the horrific violence of the time might put off some readers.  Sheean (1899-1975) was a novelist and journalist best known for his political memoir Personal History, which was the basis for Alfred Hitchcock’s film Foreign Correspondent.  Luisa Sanfelice’s story has been told before, most notably by Alexandre Dumas in his massive, over 1700-page novel La San-Félice.  I have read that Dumas actually liked this novel better than The Three Musketeers and The Count of Monte Cristo, even though I admit I started it and didn’t have the patience to finish.  One of these days, I might get back to it.  Sheean’s novel, even with its digressions by the author, is much more compact.  There have been two films about Luisa Sanfelice, one made in 1942 and the other in 2004, but they are both based on Dumas’ novel, not Sheean’s.

Sanfelice can be borrowed from the Buhr Shelving Facility.

Sheean's novel is still in print in Italian, with the title Luisa Sanfelice. 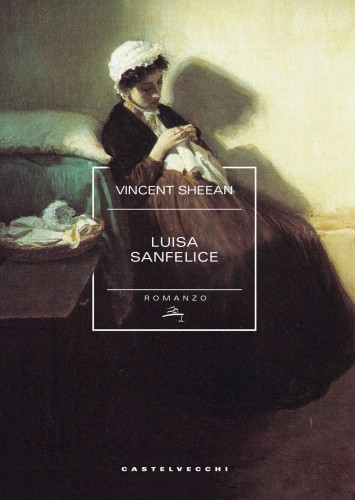