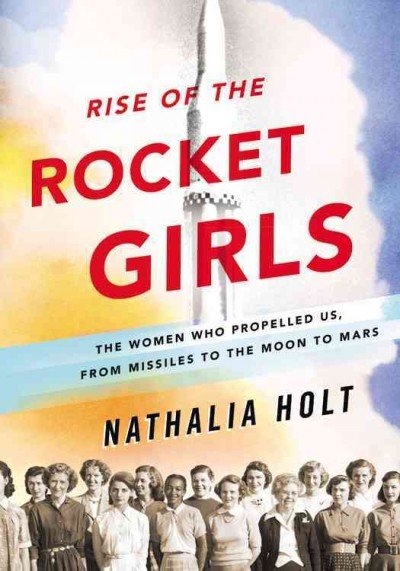 In highlighting the stories of black women mathematicians at Langley Air Force Base, the much-lauded Hidden Figures (along with its recent film adaptation) has reignited popular interest in women’s contributions to STEM fields. Readers hoping to explore this topic further are sure to enjoy Nathalia Holt’s Rise of the Rocket Girls: The Women who Propelled Us, From Missiles to the Moon to Mars.

Holt profiles multiple generations of women working at the Jet Propulsion Laboratory (JPL), tracing the history of the lab and the people who ran it from its inception in the 1940s to its absorption by NASA, to the present day. Information gleaned from archival research and interviews equipped Holt to contextualize the lives and work of Barby Canwright, Macie Roberts, Barbara Paulson, Helen Ling, Sue Finley, Sylvia Miller, and their colleagues in a broader sociopolitical landscape.

Holt’s accessible and well-organized prose also explains the science behind the ballistics and rocketry work that set the stage for space exploration. The women working at JPL performed advanced calculations using pencil and paper alone before pioneering the use of programming language and scientific computing. In fact, the original human computers often worked with greater speed and accuracy than their early technological counterparts.

Despite their meticulous and important work, the “rocket girls” faced gender-based discrimination and challenges in their professional and personal lives. From doing the work of an engineer without the salary and official title of one to losing a job after having a baby, this book details real women’s experiences of inequalities that linger today.

I always appreciate a work of nonfiction that reads like a novel, and Rise of the Rocket Girls does not disappoint. Communicating scientific concepts to popular audiences is no easy task, and Holt has done it in an engaging, personal way.
You can find Rise of the Rocket Girls in the Shapiro Undergraduate Library, Hatcher Graduate Library, and Art, Architecture, & Engineering Library.