Quietly in Their Sleep is the sixth book in Donna Leon’s mystery series featuring Venetian policeman Commissario Guido Brunetti.  While his overbearing boss, Patta, is away, Brunetti is in charge of the police station.  He receives a visit from Maria Testa, a young woman who looks vaguely familiar to him.  It turns out she had once been a nun named Suor’Immacolata and had worked in the nursing home where Brunetti’s mother was a patient.  She left the order because she suspected that five patients in another nursing home where she worked were murdered.  Their deaths had appeared to be of natural causes, but she became suspicious because they died suddenly, after leaving money to the nursing home in their wills.  The mother superior of the order and the nursing home’s chaplain vigorously deny that the deaths were anything but natural.  Maria has taken a job on the Lido, but she feels that she’s in danger because of what she suspects.

Brunetti questions the staff of the nursing home, the mother superior, the chaplain, and the relatives of the dead patients, and turns up no evidence of any foul play.  Signorina Elettra, the police secretary who’s an expert computer hacker, and one of the most delightful recurring characters in the series, obtains copies of the wills, but it appears that none of the dead patients had left money to the nursing home.  Brunetti begins to think he’s on a wild goose chase.  But after Maria is severly injured, and left in a coma, by a hit and run driver on the Lido, and one of the patients’ relatives dies in suspicious circumstances, Brunetti realizes Maria was right, after all, and that members of the religious order were involved in the murders.  But can he prove it?

As usual with Leon, the dark goings-on are contrasted with Brunetti’s life with his loving family: his wife Paola, a professor of English and a gourmet cook, and their two teenage children.  In this book, Brunetti’s daughter Chiara receives a bad grade, for the very first time, in her religious instruction class, which is run by a priest suspected of sexual abuse.  Brunetti and Paola want to pull her our of the class, but at the time this was written, in the late 1990s, children in Italy who didn’t take religious instruction classes were scorned by their classmates.  I do not know if this is still true.  But, without giving too much away, this storyline is resolved in a very satisfactory manner.

Quietly in Their Sleep takes place during an unusually warm early spring, and I could identify with it because this was the time of year I was in Venice, and the weather was also unusually warm.  I stayed in a hotel on the Lido, near the place where Maria Testa has gone to live after leaving the order.  So the locations were very familiar to me.  I highly recommend the book, as I do all of Leon’s mysteries.  Please note that some of Leon’s books have different titles in the British and American editions.  Quietly in Their Sleep is called The Death of Faith in the British edition.

Quietly in Their Sleep is available from the Shapiro Undergraduate Library. 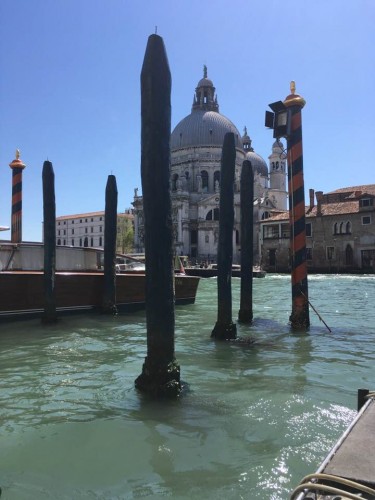 Here is a picture I took of the Grand Canal in Venice during my recent visit.  It's a view that Guido Brunetti would have seen very often. 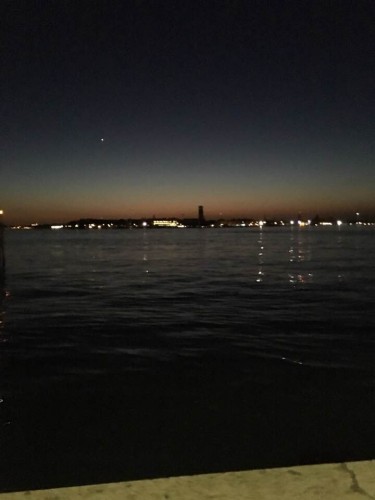 A view of Venice at night, from the hotel where I stayed on the Lido.  This is the area where Maria Testa lived after leaving the order of nuns.