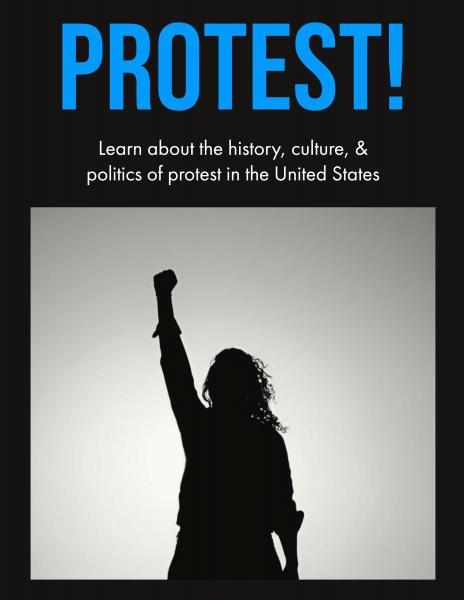 Protest is the right to freedom of assembly, freedom of association, and freedom of speech. It   is integral to democracy. This July, learn more about the history, culture, and politics of protest in the United States.

Explore the history of protest in the United States in ebooks like A People’s History of Riots, Protests, and the Law and Rebels and Renegades: A Chronology of Social and Political Dissent in the United States. Protests and uprisings in the 20th century are the focus of titles like American Patriotism, American Protest: Social Movements since the Sixties and Anarchy, Protest & Rebellion and the Counterculture that Changed America.

Art, as a creative expression of feelings or emotions, has often been intertwined with protest. Books like Signs of Resistance, Make Art Not War, and Protest! A History of Social and Political Protest Graphics explore the visual aspects of protest culture. Poetry and protest are looked at in Behind the Lines: War Resistant Poetry on the American Homefront since 1941.

Learn more about the Civil Rights and anti-Vietnam War Movements, the fight for immigrant rights, and Stonewall and the Gay Rights Movement. Local history looks at the 1967 Detroit Rebellion. Films and books look at the 1992 L.A. uprising. Recent movements, protest, and unrest are discussed in titles like The Occupy Movement Explained and Dissent in Dangerous Times.

The above items and more can be found in this spreadsheet.