Hello again dear readers. I got a little behind my initial schedule goal because apparently I do not read as much of thee genres as I do YA and graphic novels. Because of this I relied a lot more on outside recommendation lists and plot summaries from the book creators themselves. So without further ado, here are my recommendations for sci-fi/fantasy, romance, and anthologies.

**Borderline by Mishell Baker- The first book in a new urban fantasy series set in LA. It follows Millie who is a bisexual, double amputee with borderline personality disorder. She is recruited into a secret organization that informs her fairies are real. She is expected to help manage human/fae relations and struggles with the new responsibilities that fall on her shoulders. I found the book interesting and it did not shy away from describing the struggles she faced due to her disabilities.

The Devourers by Indras Das - The story of a college history professor named Alok meeting a mysterious stranger who immediately confesses to being half-werewolf and tells Alok the start to a fantastical story. In order to learn the end of the tale Alok agrees to transcribe a collection of what are presumably the stranger’s personal papers. In the process he slowly learns the history of werewolves through a particular man’s story in seventeenth-century Mughal India. He also begins to fall for the stranger. The novel seems to be an ode to the idea that history is a type of story-telling and how that can play out in verbal and written forms. There is bisexual and genderqueer representation. Content warning: sexual assault.

The Raven Tower by Ann Leckie - An epic fantasy narrated by a god who happens to be a giant rock and lived through the complete evolution of the plant. He tells the story of Eolo, a bisexual, trans man, and Mawat, the next Raven’s Lease. The Raven is another god that chooses one man to sit in his stead and rule the land of Iraden. Mawat arrives to the seat of the throne and finds his father has disappeared and his uncle has usurped the Raven’s Lease from him. This is the story of how he, Eolo and the Raven himself react to the uncle’s plot to steal the kingdom.

A Taste of Honey by Kai Ashanti Wilson - Novella “Aqib bgm Sadiqi, fourth-cousin to the royal family and son of the Master of Beasts, has more mortal and pressing concerns. His heart has been captured by a handsome Daluçan soldier named Lucrio. They become swept up in a whirlwind romance, but neither Aqib nor Lucrio know whether their love can survive all the hardships the world has to throw at them.” -- Back cover.

The Root: a novel of the Wrath & Athenaeum  by Na'amen Gobert Tilahun. - This is a diverse story that’s an interesting mix of urban fantasy and portal fantasy. Erik, a gay former teen star living in San Francisco, thought his life was complicated, but then he learns he is Blooded: descended from the Gods. “Struggling with a power he doesn't understand and can barely control, Erik discovers that a secret government agency is selling off Blooded like lab rats to a rival branch of preternatural beings in 'Zebub--San Francisco's mirror city in an alternate dimension. Lil, a timid apprentice in 'Zebub, is searching for answers to her parents' sudden and mysterious deaths. Surrounded by those who wish her harm and view her as a lesser being, Lil delves into a forgotten history that those in power will go to dangerous lengths to keep buried. What neither Erik nor Lil realize is that a darkness is coming, something none have faced in living memory. It eats. It hunts. And it knows them.” -- Back cover. 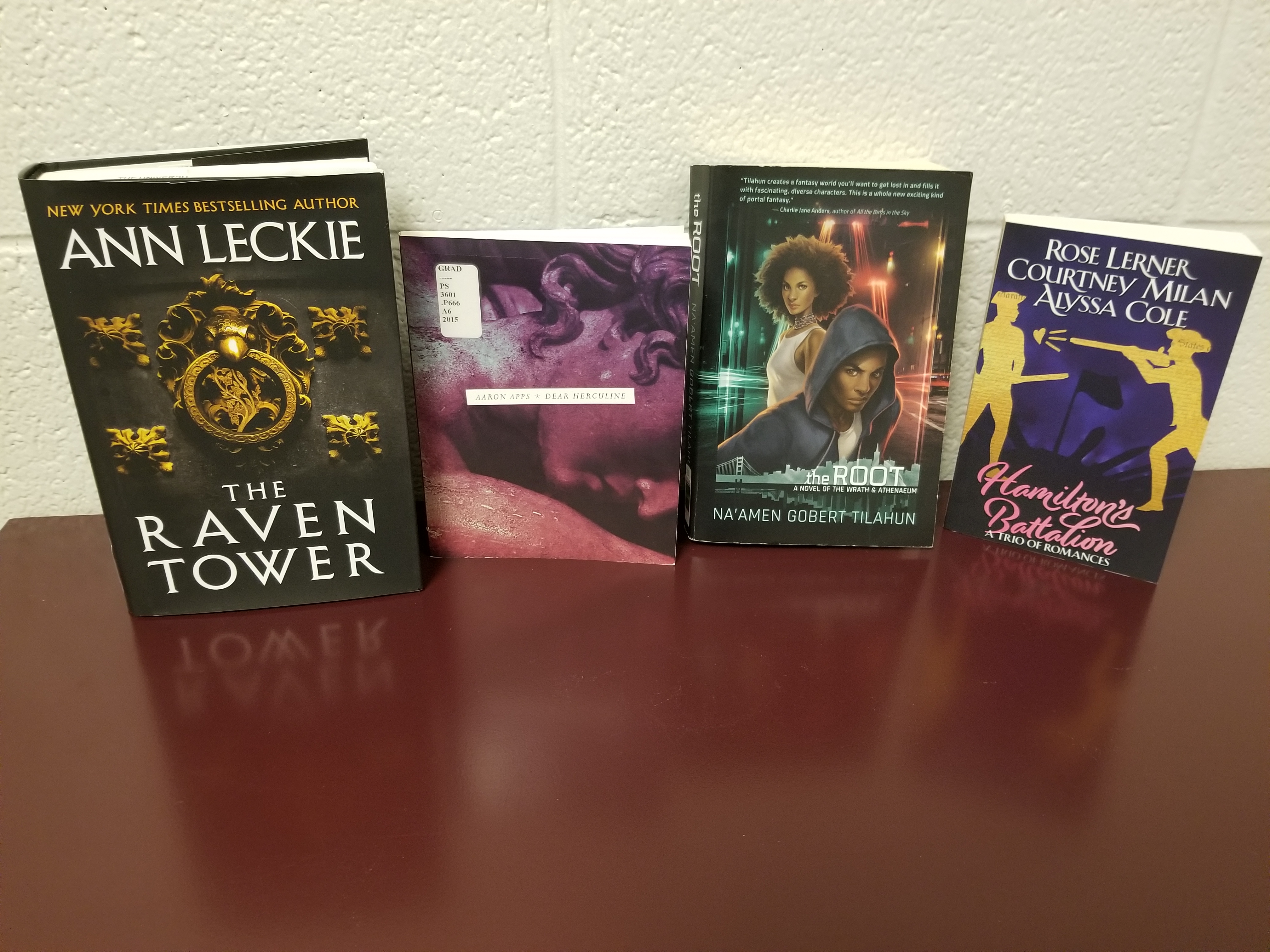 Hamilton’s Battalion by Rose Lerner, Courtney Milan, Alyssa Cole - This is a collection of three novellas about fictional romance stories with Alexander and Eliza Hamilton acting as side characters. The first is between a woman disguised as a man in Hamilton’s battalion and her childhood friend that mistaken stumbles into her camp. The second is an enemy to lovers story between a black soldier from Hamilton’s battalion and British officer who had deserted his post. The final story is about one of Eliza’s servants, Mercy, falling for a visiting dressmaker named Andromeda.

The penalty for holding by Georgette Gouveia - "When the quarterback of the hapless New York Templars is injured, backup QB Quinn Novak takes the team to the playoffs. There he attracts the attention of two other quarterbacks who've been rivals since high school--Mal Ryan of the Philadelphia Quakers and Tam Tarquin of the San Francisco Miners. Quinn begins a volatile relationship with the narcissistic Mal and a loving one with the open-hearted Tam, keeping each secret from the other. What he doesn't know is that the two have a complex sexual history of their own. Quinn will have to overcome a thorny present as well as a troubled past if he hopes to have a promising future."-- Back cover

Charming the vicar by Jenny Frame - “Finnian Kane, famous master of illusion, mentalist, and renowned atheist, has a crisis of faith after her sister's death. She rents a cottage in the village of Axedale in Kent, desperately trying to find a safe haven from the intrusive media to grieve and work out how to move on. The Reverend Bridget Claremont makes it her mission to help the enigmatic Finnian find her faith in life again. Bridge has long yearned for a life partner, and her best friend's wedding has intensified that desire. But when you're a lesbian vicar in a small English village, it's not easy to find your perfect match.Their chemistry is clear from the start, despite their different beliefs and Bridge insisting Finn isn't her type. But will the mentalist find the magic that can charm the vicar?"--Back cover.

Swearing off stars by Danielle M. Wong -”Lia is one of the first women studying abroad at Oxford University in the 1920s. Finally free from her overbearing Brooklyn parents, she finds a welcome sense of independence in British college life. Lia quickly falls for Scarlett Daniels, an aspiring actress and hardheaded protester. Scarlett introduces her to an exciting gender-equality movement with high stakes. But when their secret love clashes with political uprising, their relationship is one of the casualties.” --Back cover.

Nepantla: An Anthology Dedicated to Queer Poets of Color edited by Christopher Soto - “In 2014, Christopher Soto and Lambda Literary Foundation founded the online journal Nepantla, with the mission to nurture, celebrate, and preserve diversity within the queer poetry community, including contributions as diverse in style and form, as the experiences of QTPOC in the United States. Now, Nepantla will appear for the first time in print as a survey of poetry by queer poets of color throughout U.S. history” -- Back cover.

**Dear Herculine by Aaron Apps - A collection of letters written by Apps, an intersex individual to Herculine Barbin, an intersex person from 19th century France whose memoirs were republished by Michel Foucault. Herculine was forced to reassign her gender to male by a judge and committed suicide in 1968 due to her discomfort with the change. Apps, also interesex, addresses the more modern struggle intersex people have to deal with of having to choose a gender of the “two” options and how their struggles are still mirroring what Herculine went through.