Art historian and University of Michigan graduate Molly M. Lindner has written a fascinating study of the Vestal Virgins of ancient Rome and the sculptures that portray them.  The Vestal Virgins were among the most powerful women of ancient Rome.  Their order existed for about 1100 years.  It was supposedly founded by the legendary King Numa Pompilius in the 700s or 600s BCE, and lasted until the 4th century CE, even after Christianity had become the official religion of the Roman Empire.  The House of the Vestals stood in the Roman Forum.  The original house burned down in Nero’s fire of 64 CE, but was rebuilt and expanded by later emperors.

There were only six Vestal Virgins at any given time, and criteria for selection were very strict.  Girls who were eligible to be Vestals had to be between six and ten years old, of sound body, and with both parents still alive and married to each other.  At first only girls from patrician families were eligible, but later, girls from the equestrian class, ancient Rome’s middle class, were allowed to become Vestals.  Vestal Virgins served for thirty years, during which time they took an oath of chastity.  But at the end of their term, they were allowed to leave the order and marry, even though relatively few did.  Some remained Vestals for over sixty years.  Their chief duty was to guard the sacred flame in the Temple of Vesta.  Legend had it that if the flame ever went out, Rome would fall.  They also guarded sacred treasures, including the Palladium, a sculpture of Minerva that Aeneas supposedly brought from Troy.  Again, if the Palladium were to be lost, legend had it that Rome would fall.  The Vestals performed sacrifices, even though the bloodier sacrifices involving animals were done by men.  One of their duties was to burn incense, which was an important part of Roman sacrifices.

Vestal Virgins had higher status in imperial Rome than any women except the empress, and they also had rights that no other women had, including the right to make a will, to testify in court, and to own property.  People entrusted wills and other legal documents to them, and they exercised a great deal of influence on behalf of their families and clients.  Many of them were close to the empress and other members of the imperial family.  They were able to come and go within the city, accompanied by a bodyguard called a lictor, who fended off the crowds.  But of course there was a terrible price to pay for having so much power.  Besides the thirty-year vow of chastity, Vestals who allowed the sacred flame to go out were beaten by the Pontifex Maximus, the chief priest of Rome, which, during imperial times, meant the emperor.  And a Vestal who was found guilty of breaking her vow of chastity was buried alive.  As Lindner points out, the story about Vestals being buried alive is told to all visitors to Rome (including myself).  The Emperor Domitian imposed strict morality laws on all women, and he had four out of the six Vestals tried for breaking their vows.  Three were found guilty and buried alive.  No one knows whether they were guilty or not.  Lindner suggests that the remaining Vestals and the girls who were chosen to take the place of the ones who were executed formed an alliance with the women of the imperial family in the face of these new laws.

At the heart of the book is a catalog of all the existing sculpture portraits, including heads, busts, and statues, of the Vestal Virgins, and how these portraits can tell us more about them than the written word, which is often contradictory.  Not many Vestals are known by name, and only two of the sculpture portraits can by identified by name.  The statues, which were often of the Chief Vestal Virgin, stood in the courtyard of the House of the Vestals and were buried for centuries after their house fell into disuse.  When archaeologist Rodolfo Lanciani excavated the House of the Vestals in 1883-84, he uncovered many of these sculptures.  Lindner discusses how the sculptures can be identified as Vestals because of the elaborate three-part headdress they wore.  The Vestals’ headdress influenced the hairstyles of other Roman women.  Lindner suggests that it was actually non-royal women, including women from the equestrian class, who first adopted a hairstyle influenced by the Vestals, and there was a “trickle-up” effect, so that eventually women of the imperial family adopted the hairstyle.  She also discusses how the portraits of the Vestals were deliberately made to resemble those of the empress or other women of the imperial family.

Another important contribution of Lindner’s book is to identify a particular sculpture type which she calls the Vestal Burning Incense, which is significant because it shows the Vestals performing one of their most important duties.  The women in these sculptures are active, which marks a significant difference from most Roman sculptures of women, where they are shown as passive figures.

Although some of the book may be of interest mostly to historians and art historians, not to the general reader, it is highly recommended as a study of these remarkable women.  It makes an important contribution to Roman history and art history.

Portraits of the Vestal Virgins, Priestesses of Ancient Rome can be borrowed from the Hatcher Graduate Library.  It is published by the University of Michigan Press.  Unfortunately, copies are very expensive, even with the staff discount.  I hope that it will be issued in paperback. 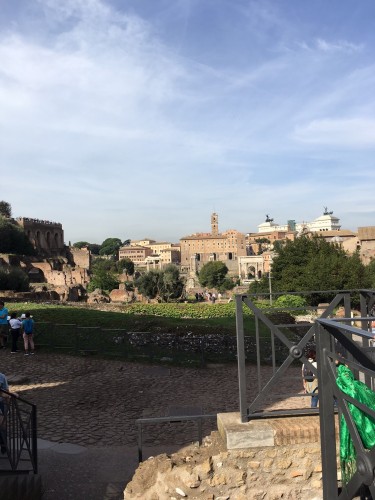 This is a picture I took of the Roman Forum during my recent visit to Rome.  The House of the Vestals can be seen at a distance.  Unfortunately, that was as close as I was allowed to get to it.