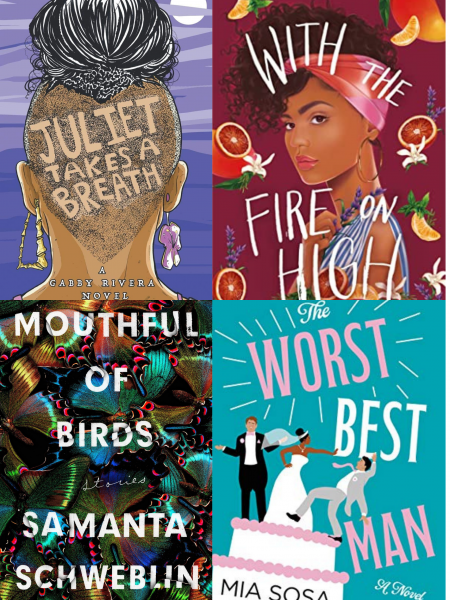 September 15-October 15 is National Hispanic Heritage Month. In celebration, I have highlighted various Latinx authors and books from amidst our collection that you can check out. There are print, ebook, and audiobooks all represented. Please feel free to include your own recommendations in the comments or let me know if you have any genre requests and I can find you even more books to check out.

*With the Fire on High(print) or *Clap when you land(audiobook) by Elizabeth Acevedo. Both are young adult novels. The first is about Emoni Santiago who is a teen mom that lives with her grandmother. Her passion is cooking. She gets the chance to take a cooking class which has an optional trip to Spain to learn from working chefs. But will she be able to swing the trip between the cost and time away from her family? The second is a novel written in verse about two girls who simultaneously lose their father in an airplane crash. Turns out he had two families, one in New York and the other in the Dominican Republic. The girls must come to terms with their loss and betrayal at the same time.

Ordinary girls: a memoir by Jaquira Díaz. "Jaquira Díaz writes an unflinching account of growing up as a queer biracial girl searching for home as her family splits apart and her mother struggles with mental illness and addiction. From her own struggles with depression and drug abuse to her experiences of violence to Puerto Rico's history of colonialism, every page vibrates with music and lyricism"-- Provided by publisher.

*Mouthful of Birds: stories by Samantha Schweblin; translated by Megan McDowell. Also available in audiobook. “A powerful, eerily unsettling story collection from a major international literary star. Unearthly and unexpected, the stories in Mouthful of Birds burrow their way into your psyche and don't let go. Samanta Schweblin haunts and mesmerizes in this extraordinary, masterful collection. Schweblin's stories have the feel of a sleepless night, where every shadow and bump in the dark take on huge implications, leaving your pulse racing, and the line between the real and the strange blur.”

The Lost Book of Adana Moreau by Michael Zapata. Also available in audiobook. “The story of a Latin American science fiction writer and the lives her lost manuscript unites decades later in post-Katrina New Orleans. In 1929 in New Orleans, a Dominican immigrant named Adana Moreau writes a science fiction novel. The novel earns rave reviews, and Adana begins a sequel. Then she falls gravely ill. Just before she dies, she destroys the only copy of the manuscript. Decades later in Chicago, Saul Drower is cleaning out his dead grandfather's home when he discovers a mysterious manuscript written by none other than Adana Moreau. With the help of his friend Javier, Saul tracks down an address for Adana's son in New Orleans, but as Hurricane Katrina strikes they must head to the storm-ravaged city for answers.”

*Juliet Takes a Breath by Gabby Rivera. Also available in graphic novel. Another young adult novel. "Juliet, a self-identified queer, Bronx-born Puerto Rican-American, comes out to her family to disastrous results the night before flying to Portland to intern with her feminist author icon--whom Juliet soon realizes has a problematic definition of feminism that excludes women of color"-- Provided by publisher.

A Long Petal of the Sea by Isabel Allende, translated from the Spanish by Nick Caistor and Amanda Hopkinson.. Also available on audiobook. “In the late 1930s, civil war gripped Spain. General Franco and his Fascists overthrew the government; hundreds of thousands fled over the mountains to the French border. Roser, a pregnant young widow, finds her life intertwined with that of Victor Dalmau, an army doctor and the brother of her deceased love. To survive, the two must unite in a marriage neither of them wants; Sponsored by poet Pablo Neruda, they embark on the SS Winnipeg along with 2,200 other refugees in search of a new life. Emigrate to Chile as the rest of Europe erupts in World War, they discover their trials are just beginning.” -- adapted from jacket

Afterlife by Julia Alvarez. Also available on ebook. “Antonia Vega has just retired from the college where she taught English when her beloved husband, Sam, suddenly dies. And then more jolts: her bighearted but unstable sister disappears, and Antonia returns home one evening to find a pregnant, undocumented teenager on her doorstep. Antonia has always sought direction in the literature she loves, but now she finds that the world demands more of her than words. Now she questions: How do we live in a broken world without losing faith in one another or ourselves?” -- adapted from jacket

*The Worst Best Man by Mia Sosa. A modern day romance novel. "A wedding planner left at the altar? Yeah, the irony isn't lost on Carolina Santos, either. But despite that embarrassing blip from her past, Lina's offered an opportunity that could change her life. There's just one hitch... she has to collaborate with the best (make that worst) man from her own failed nuptials. Marketing expert Max Hartley is determined to make his mark with a coveted hotel client looking to expand its brand. Then he learns he'll be working with his brother's whip-smart, stunning--absolutely off-limits--ex-fiancée. And she loathes him. If they can nail their presentation without killing each other, they'll both come out ahead."-- Provided by publisher. 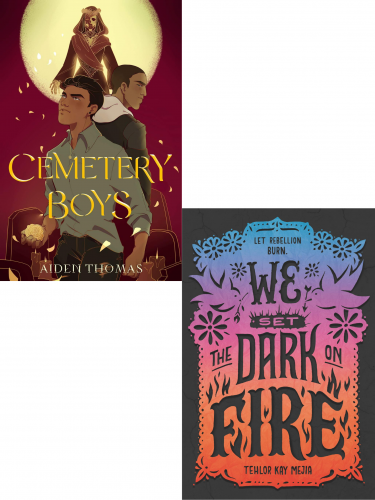 Bonus books that you can get through U of M’s interlibrary loan or your local public library. I usually only cover things in our collection, but I couldn’t resist including these two queer young adult books.

*Cemetery Boys by Aiden Thomas. “When his traditional Latinx family has problems accepting his gender, Yadriel becomes determined to prove himself a real brujo(male magician). With the help of his cousin and best friend Maritza, he performs the ritual himself, and then sets out to find the ghost of his murdered cousin and set it free. However, the ghost he summons is actually Julian Diaz, the school’s resident bad boy, and Julian is not about to go quietly into death. He’s determined to find out what happened and tie up some loose ends before he leaves. Left with no choice, Yadriel agrees to help Julian, so that they can both get what they want. But the longer Yadriel spends with Julian, the less he wants to let him leave.” - Goodreads synopsis

*We Set the Dark on Fire by Tehlor Kay Mejia. “At the Medio School for Girls, distinguished young women are trained for one of two roles in their polarized society. Depending on her specialization, a graduate will one day run a husband’s household or raise his children, but both are promised a life of comfort and luxury, far from the frequent political uprisings of the lower class. Daniela Vargas is the school’s top student, but her bright future depends upon no one discovering her darkest secret—that her pedigree is a lie. Her parents sacrificed everything to obtain forged identification papers so Dani could rise above her station. Now that her marriage to an important politico’s son is fast approaching, she must keep the truth hidden or be sent back to the fringes of society, where famine and poverty rule supreme. On her graduation night, Dani seems to be in the clear, despite the surprises that unfold. But nothing prepares her for all the difficult choices she must make, especially when she is asked to spy for a resistance group desperately fighting to bring equality to Medio. Will Dani cling to the privilege her parents fought to win for her, or to give up everything she’s strived for in pursuit of a free Medio—and a chance at a forbidden love?” - Goodreads synopsis.