In the Name of the Family is the second of Sarah Dunant’s novels, following Blood and Beauty, about the infamous Borgia family of the Italian Renaissance.  Over the years, the Borgias have gained a reputation for being brutal, bloody, and corrupt.  In Dunant’s version of the story, there is some truth to this, but the worst stories about them, including poisonings and incest, are untrue, and inventions of their enemies.

The patriarch of the family is Pope Alexander VI (Rodrigo Borgia).  Originally from Spain, he is seen as a foreign upstart by the Italian nobility.  He has fathered several illegitimate children, most notably Cesare, leader of a mercenary army, and Lucrezia, who serves as her father’s marriage pawn in the complicated political games of Renaissance Italy.  The book opens in the winter of 1501-1502, as Lucrezia, at twenty-two, journeys to the court of Ferrara to marry her third husband, Alfonso d’Este, the heir to the Duke of Ferrara.  She is still grieving for her beloved second husband, another Alfonso, who was murdered at her brother’s orders when her marriage became politically inconvenient.  With only her loyal ladies-in-waiting for support, Lucrezia enters the hostile environment of the Ferrarese court.  Her husband is a surly, uncommunicative man, whose chief interests are forging cannons and sleeping with prostitutes, from whom he has contracted syphilis.  Lucrezia’s miserly father-in-law withholds the enormous dowry her father had promised her.  He and Lucrezia’s snobbish sister-in-law, Isabella, regard Lucrezia as too low-born for the Este family, who are members of the old Italian nobility.  But Lucrezia asserts her rights, and eventually she is allowed to keep her dowry.  She finds comfort in her friendship with the poet Pietro Bembo, and becomes his muse.  But when it seems that their relationship will develop into something more, she realizes she cannot act on her feelings for Bembo without shattering her father’s alliance with Ferrara.

Meanwhile, Lucrezia’s brother Cesare plunders his way through the cities of the Romagna at the head of his army as he attempts to carve out a Borgia state.  He becomes more and more unstable as he descends into syphilitic madness.  Even his father starts to fear him.  Cesare brutally puts down a rebellion against him among his subordinates.  But Cesare, who always seems to do the unexpected, has a tenderer side, as can be seen when he rushes to Lucrezia’s bedside when he hears she is ill.

Dunant tells the story from several points of view, including Lucrezia, Cesare, and the Pope.  A compelling addition is the point of view of Niccolò Machiavelli.  A young Florentine diplomat, Machiavelli goes as an envoy to Cesare Borgia and becomes fascinated by him.  His experiences with Cesare will become the inspiration for The Prince.  Machiavelli is a complex character, who drinks heavily and spends time with prostitutes, but with strong feelings for his new wife, Marietta, a young woman with an interest in politics that is unusual for a woman of her time.  In fact, I would have liked to see more of Marietta Machiavelli.

In the Name of the Family is available from the Shapiro Undergraduate Library. 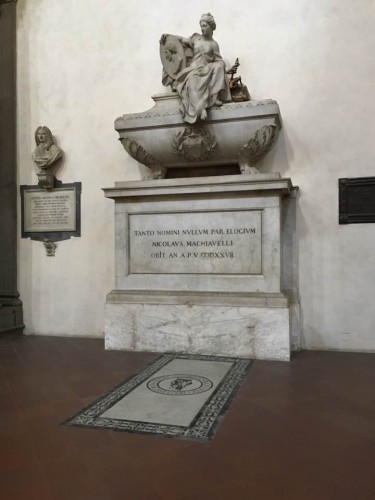 Here is a picture I took on my recent visit to Florence, of the tomb of Machiavelli in the Church of Santa Croce.