A Murder on the Appian Way is the fifth book in Steven Saylor’s mystery series featuring ancient Roman detective Gordianus the Finder.  It is inspired by actual events that took place in 52 BCE.  The plot focuses on two rival politicians, Clodius and Milo.  Clodius is an aristocrat turned rabble-rouser and has set himself up as the champion of the common people.  Milo, on the other hand, is of humble origins but has gained the support of the aristocrats.  Naturally, the two of them hate each other, and matters come to a head when Clodius’ body is found on the Appian Way, supposedly after a confrontation with Milo’s supporters.  But every witness to the murder tells a different story about how it happened, who instigated the attack, and even what time of day it took place.  Chaos ensues, riots break out in the streets of Rome, and Clodius’ supporters burn down the Senate house.  In the aftermath of the riots, Pompey becomes sole consul and sends his troops out into the Roman Forum to keep order.  Pompey hires Gordianus to find out exactly how Clodius was murdered, and who murdered him.

The investigation leads Gordianus and his son Eco on a journey along the Appian Way, as they visit the inns, temples, and villas near the site of the murder.  But they receive conflicting reports from the various witnesses, and danger awaits them on their return journey, as they are kidnapped and kept in a pit for over forty days.  Will they be able to escape?  And will they discover the truth behind the murder?

Steven Saylor’s descriptions of life in ancient Rome are vivid, as they always are in this series.  A Murder in the Appian Way is particularly strong in its details of the Roman political and legal system in the late Republic, and we can clearly see signs that the Republic is heading toward its last days.  Saylor does a wonderful job of giving the details without seeming to lecture the reader.  Also, Saylor gives us beautiful descriptions of locations along the Appian Way.  And, of course, he keeps up the reader’s suspense because we want to know if, and how, Gordianus and Eco will be able to escape their captors and solve the murder.

Another excellent feature of this series is the ongoing story of Gordianus and his family: his Egyptian/Jewish wife Bethesda, formerly his slave, his two adult sons Eco and Meto, and his teenage daughter Diana.  In this volume Eco, of course, accompanies Gordianus on his journey.  Meto is serving in Julius Caesar’s army.  He, and Caesar, make a brief appearance in the book.  And there is a drama involving Diana, but to say too much would be a spoiler.

Also, Saylor is excellent at including famous figures in his novels, while keeping the focus on the fictional characters of Gordianus and his family.  As mentioned above, the two politicians Clodius and Milo were real people, and Pompey, Caesar, and Marc Antony all make appearances in this novel.  Cicero is a major recurring figure in the series.  Gordianus worked for Cicero in the earlier volumes, but their relationship has grown hostile over the years.  Without giving too much away, I will say that something happens between them in this novel, and it appears unlikely that they will be able to settle their differences.  But Gordianus maintains good relations with Cicero’s freed slave, Tiro, also an actual historical figure, who invented a form of shorthand for reporting trial proceedings.  I would recommend this series to anyone who enjoys a good mystery, and especially to anyone interested in ancient Rome.

A Murder on the Appian Way is available from the Hatcher Graduate Library. 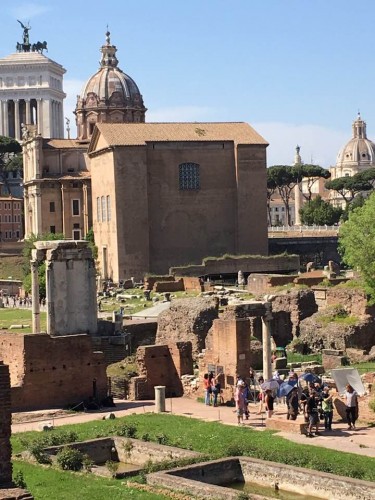 Here is a picture of the Roman Forum, where much of the action takes place, which I took on my recent visit to Rome.  It shows the Senate House, which burned down at the time this novel takes place, but which, of course, was rebuilt shortly afterwards.  Our bus drove along the Appian Way, or at least along the only driveable part of it, but I couldn't take any good pictures from the bus.