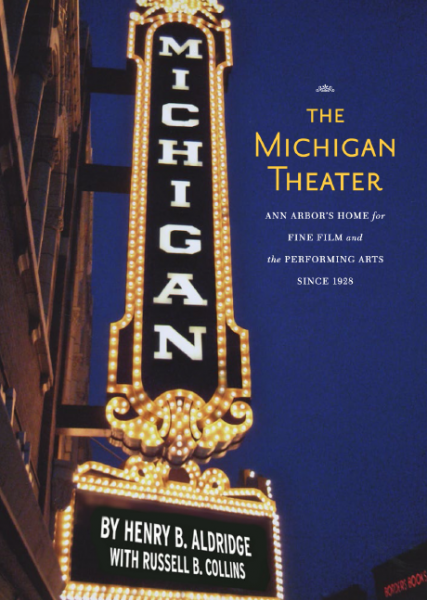 The Michigan Theater:  Ann Arbor's Home for Fine Film and the Performing Arts Since 1928 provides a chronological history of the theater from its early days as a silent film theater through the years of decline, and on to its restoration and prominent role as a home for cultural activities in Ann Arbor.

The book was written by Henry Aldridge, Emeritus Professor of Electronic Media and Film Studies at Eastern Michigan University and a long time organist at the Michigan Theater, with Russ Collins,  Executive Director & CEO of the Michigan Theater.   Aldridge is one of the founders of the group that worked to save the theater in the 1970s and Collins has been the theater's manager since 1982.

Not only does the book provide a detailed history of the theater, including information on staff and volunteers, the live performances and key movies shown, the updates to keep up with changes in film and audience tastes, and the move from a commercial theater to a community resource, it also puts the theater and its changes in the context of the times.

The chapters cover the early days of movies from nickelodeons to movie palaces, to multiplexes on the edge of town.  The changes in film from silent movies to talkies is covered, but also widescreen, 3-D, color, and other innovations that have been part of film history.  There are numerous details of the construction and features of the theater, the renovations, and, most especially, the Barton organ.  During the early days  customers saw live theater, vaudeville, heard musicians, and then saw the movie.

The book is full of beautiful photographs of the theater, other Ann Arbor buildings and people, and many ads for movies and shows from the Bentley Historical Library archives, the Michigan Theater's own collections, Aldridge's personal files, and other sources, including reproductions of many of the advertisements from microfilm copies of the Ann Arbor News in the Hatcher Graduate Library's collection.

This is a quick and enjoyable read that may add to your appreciation of the Michigan Theater the next time you attend a live performance or a movie there.  You can find this book in the Shapiro Undergraduate Library collection.