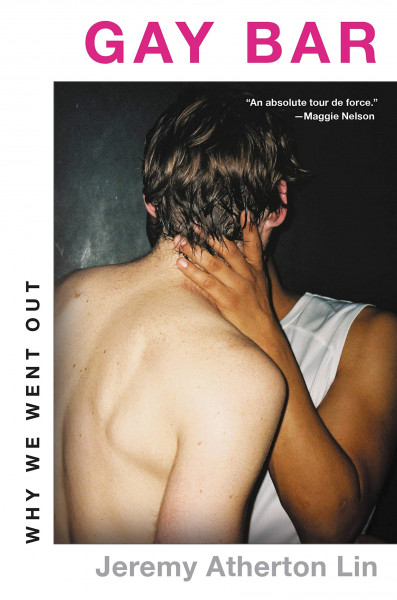 Check out some of the LGBTQA+ books in the Library's OverDrive Collection. More information on OverDrive and how to download onto your device can be found in this research guide.

My Life in Transition by Julia Kaye

My Life in Transition is a story that's not often told about trans lives: what happens beyond the early days of transition. Both deeply personal and widely relatable, this collection illustrates six months of Julia's life as an out trans woman—about the beauty and pain of love and heartbreak, struggling to find support from bio family and the importance of chosen family, moments of dysphoria and misgendering, learning to lean on friends in times of need, and finding peace in the fact that life keeps moving forward.

Gay Bar: Why We Went Out by Jeremy Atherton Lin

In the era of Grindr and same-sex marriage, gay bars are closing down at an alarming rate. What, then, was the gay bar? Set between Los Angeles, San Francisco, and London, Gay Bar takes us on a time-traveling, transatlantic bar hop through pulsing nightclubs, after-work dives, hardcore leather bars, gay cafes, and saunas, asking what these places meant to their original clientele, what they meant to the author as a younger man, and what they mean now.

You Exist Too Much by Zaina Arafat

A "provocative and seductive debut" of desire and doubleness that follows the life of a young Palestinian American woman caught between cultural, religious, and sexual identities as she tries to lead an authentic life (O, The Oprah Magazine).

“An unforgettable portrait of three women, trans and cis, who wrestle with questions of motherhood and family making . . . Detransition, Baby might destroy your book club, but in a good way.”—Andrea Lawlor, author of Paul Takes the Form of a Mortal Girl.

Felix Ever After by Kacen Callender

From Stonewall and Lambda Award–winning author Kacen Callender comes a revelatory YA novel about a transgender teen grappling with identity and self-discovery while falling in love for the first time.

Transgressive, foulmouthed, and brutally funny, Brontez Purnell's 100 Boyfriends is a revelatory spiral into the imperfect lives of queer men desperately fighting the urge to self-sabotage. As they tiptoe through minefields of romantic, substance-fueled misadventure—from dirty warehouses and gentrified bars in Oakland to desolate farm towns in Alabama—Purnell's characters strive for belonging in a world that dismisses them for being Black, broke, and queer. In spite of it—or perhaps because of it—they shine.

An embittered dog walker obsessed with a social media influencer inadvertently puts a curse a young man—and must adventure into mysterious dimension in order to save him—in this wildly inventive, delightfully subversive, genre-nonconforming debut novel about illusion, magic, technology, kinship, and the emergent future.

Love is an Ex-Country by Randa Jarrar

Queer. Muslim. Arab American. A proudly Fat woman. Randa Jarrar is all of these things. In this "viscerally elegant" and "intimately edgy" memoir of a cross-country road trip, she explores how to claim joy in an unraveling and hostile America (Kirkus Reviews).

From popular LGBTQ advice columnist and writer John Paul Brammer comes a hilarious, heartwarming memoir-in-essays chronicling his journey growing up as a queer, mixed-race kid in America's heartland to becoming the "Chicano Carrie Bradshaw" of his generation.

In this acclaimed story collection, Chilean transgender performer and author Iván Monalisa Ojeda delivers an irreverent, honest and full-throated love song to New York City from the perspective of a group of trans Latinx immigrant friends who walk the streets, smoke crystal meth, compete in beauty contests, look for clients on their impossibly high heels, and fall prey to increasingly cruel immigration policies.

The Guncle by Steven Rawley

From the bestselling author of Lily and the Octopus and The Editor comes a warm and deeply funny novel about a once-famous gay sitcom star whose unexpected family tragedy leaves him with his niece and nephew for the summer.

Transgender author Agnes Borinsky deftly explores gender identity and queer romance in this heart-wrenching debut novel. Alex feels like he is in the wrong body. His skin feels strange against his bones. And then comes Tracy, who thinks he's adorably awkward, who wants to kiss him, who makes him feel like a Real Boy. But it is not quite enough. Something is missing. As Alex grapples with his identity, he finds himself trying on dresses and swiping on lipstick in the quiet of his bedroom. He meets Andre, a gay boy who is beautiful and unafraid to be who he is. Slowly, Alex begins to realize: maybe his name isn't Alex at all. Maybe it's Sasha Masha.

At Heaven's center, Whitney seeks to understand their relationship to their mother and grandmother, those first windows into womanhood and all its consequences. Whitney retraces a roving youth in deeply observant, psychedelic prose-all the while folding in the work of thinkers like Judith Butler, Donna Haraway, and C. Riley Snorton-to engage transness and the breathing, morphing nature of selfhood.

Through candid, intimate correspondence with friends, lovers, and family, Emezi traces the unfolding of a self and the unforgettable journey of a creative spirit stepping into power in the human world. Their story weaves through transformative decisions about their gender and body, their precipitous path to success as a writer, and the turmoil of relationships on an emotional, romantic, and spiritual plane, culminating in a book that is as tender as it is brutal.