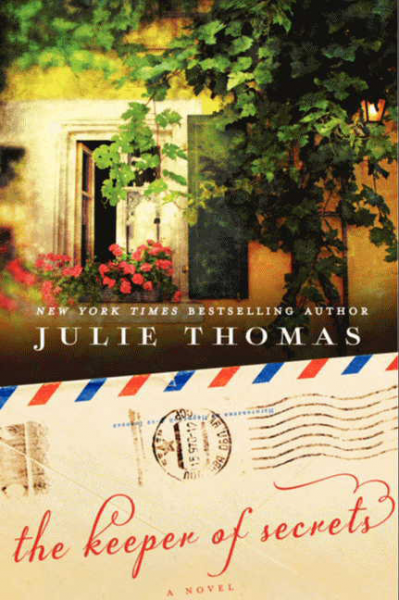 The Keeper of Secrets by Julie Thomas opens in Berlin in the 1930s with 14-year old Simon Horowitz, the son of a prominent Jewish banker, who is a talented young violinist.  His father owns many fine instruments, including the gem of his collection, a 1742 Guarneri del Gesú violin.  Simon's privileged life and artistic aspirations come to a crashing end when the Nazi's confisicate his family's bank, home, and possessions and he and his family are separated from each other and sent to concentration camps.

The story moves foward to 2008 where we meet  14-year old Daniel Horowitz, a rising talent in the world of violin music.  When his mother bans him from playing baseball  to protect his hands from injury, Daniel rebels refusing to play the violin, if he can't also play baseball with his friends (an activity he enjoys, but also something that lets him feel like a normal kid, instead of muscial prodigy).

In an effort to get Daniel to reignite his passion for the violin, Maestro Rafael Gomez, a prominent conductor, hatches a riksy plan to reunite Daniel and his family with the long, lost Guarneri violin.  Along the way, we follow the violin to post-WWII Soviet Union, and meet a now powerful Russian billionnaire and supporter of the arts who also has strong emotional ties to a Guarneri volin.

Filled with episodes of loss and inhumanity in Dachau to KGB atrocities, this is also a story of love of family, survival, and the power of music.   You can find The Keeper of Secrets in the Hatcher Graduate Library.