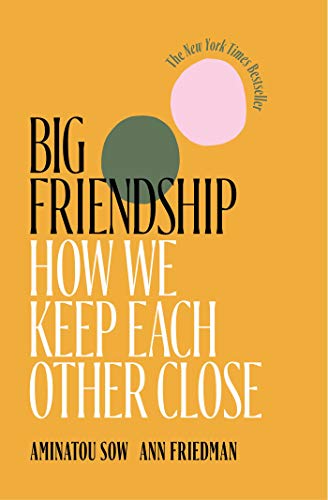 Big Friendship by Aminatou Sow and Ann Friedman
A close friendship is one of the most influential and important relationships a human life can contain. Anyone will tell you that! But for all the rosy sentiments surrounding friendship, most people don't talk much about what it really takes to stay close for the long haul.

How We Show Up by Mia Birdsong
A provocative, essential guide to showing up for each other and cultivating community, from activist, community organizer and thought leader whose viral TED talk has been viewed more than 1.5 million times.

Friendshipping by Jen Bane and Trin Garritano
With eight billion people in the world, why is it so hard to meet and make new friends?

The Cast by Amy Blumenfeld
Twenty-five years ago, a group of ninth graders produced a Saturday Night Live-style videotape to cheer up their ailing friend. The show's running time was only ninety minutes, but it had a lasting impact: Becca laughed her way through recovery, and the group-Jordana, Seth, Holly, and Lex-became her supporting cast for life. On the silver anniversary of Becca Night Live, the friends reunite over the Fourth of July to celebrate Becca's good health-but nothing goes as planned

If We Were Us by K. L. Walther
A high school romance that flips the switch on the will they or won't they trope when two best friends are forced to confront truths about their friendship, identities, and relationships during their senior year at boarding school.

Everything Here is Under Control by Emily Adrian
Amanda is a new mother, and she is breaking. After a fight with her partner, she puts the baby in the car and drives from Queens to her hometown in rural Ohio, where she shows up unannounced on the doorstep of her estranged childhood best friend. Amanda thought that she had left Carrie firmly in the past. After their friendship ended, their lives diverged radically: Carrie had a baby the summer after high school, became a successful tattoo artist, and never escaped Ohio's conservative grid of close-cut grass. But the trauma of childbirth and shock of motherhood compel Amanda to go back to the beginning and to trace the tangled roots of friendship and family in her own life.

It's Now All Downhill from Here by Terry McMillan
After a sudden change of plans, a remarkable woman and her loyal group of friends try to figure out what she’s going to do with the rest of her life—from Terry McMillan, the bestselling author of How Stella Got Her Groove Back and Waiting to Exhale.