I Always Loved You is Robin Oliveira's beautifully-written historical novel about Mary Cassatt, an American Impressionist artist living in Paris in the late 19th century.  After a brief prologue set in 1926, with Mary in her 80s and losing her eyesight, the main part of the novel begins in 1877.  Mary is 33, and her paintings have been rejected by the Salon, the officially-sanctioned exhibition of academic art.  She feels dejected and thinks her art isn't any good.  Her father keeps trying to get her to move back home to Philadelphia so he can marry her off before it's too late for her to have children.  Her sister Lydia suffers from an illness the doctors have not been able to cure.  Mary wonders if she should give up on her art and go home, when an encounter with Edgar Degas, who is, of course, best known for his paintings of ballet dancers, changes her life.

Mary had admired Degas' art for a long time, but what she doesn't realize is that he had also admired hers, and he had begged the introduction.  Their first meeting leads to a tumultuous relationship that lasts for many years.  Degas' praise gives Mary the confidence she needs to continue with her art.  Instead of Mary moving back to Philadelphia, her parents and sister move to Paris.  Her father is mostly concerned with financial matters, and doesn't think Degas is the right man for his daughter.  Degas, who, along with the other Impressionists, is considered a rebel, has not made much money from his art so far, and his family lost most of their income when his father's bank collapsed.  Mary's mother is more supportive, but she is preoccupied by her daughter Lydia's illness.

Degas convinces Mary to forget the Salon and to exhibit with the Impressionists instead.  Her early work was in a more traditional, academic style, but at the time the novel takes place, she has begun to paint in the style of the Impressionists.  The first year after her meeting with Degas is an extraordinarily productive one for her, and she is thrilled about the exhibition--only to have Degas cancel it, saying it will conflict with the World's Fair in Paris.  The next year, the exhibition takes place, but Mary's paintings receive devastating reviews from the critics.  This leads to a long period of self-doubt, but in the end, Mary continues to paint and to exhibit her paintings with the Impressionists.

Eventually Mary's paintings gain recognition, but her personal life is not very happy.  Her sister Lydia dies, and her relationship with Degas goes through a series of ups and downs, mostly because of thoughtless, selfish acts on his part.  His cancelation of her first exhibition is one of many examples.  Every time Mary and Degas come close to declaring their love for each other, he makes a cruel remark to spoil things.  At one time, they both become interested in printmaking and decide to start a journal together, but at the last minute Degas decides not to publish it.  Meanwhile, Mary had spent a whole year working on the prints for the journal, when she could have painted,  so she has nothing to show for her year of hard work.  She and Degas decide to go their separate ways, even though they never lose their admiration for each other's work.  Oliveira suggests that perhaps they are too similar to have a lasting relationship.  They both suffer from self-doubt, and, tragically, both eventually lose their eyesight, even though it happens much earlier with Degas.  This is certainly a part of what makes him so difficult and short-tempered.

Although the focus is on Mary Cassatt and Edgar Degas, Oliveira introduces the reader to all the famous Impressionist artists, including Claude Monet, Édouard Manet, Berthe Morisot, Auguste Renoir, and Camille Pissarro.  There is a subplot about Berthe Morisot, the best-known female Impressionist besides Mary Cassatt.  She and the married Manet had been lovers, and obviously love each other still, even though Manet will not leave his wife Suzanne, who had been his father's mistress before their marriage, and Berthe is married to Manet's brother Eugène, who strongly resembles Manet, except that, of course, he's less talented.  Needless to say, the relationships  among these characters are very complicated.  Manet and Degas are good friends, and it is tragic to see Manet's deterioration and early death from syphilis.  Berthe and Mary become friends, and early on Berthe tries to warn Mary about Degas and his turbulent nature.

Another interesting aspect of the book is Oliveira's description of the American community in Paris.  At the time, Americans in Paris made friends mostly among themselves and did not even learn to speak French very well.  Mary is an exception.  She finds the American community stifling, even though she does have her friends among the community, one of whom is Abigail Alcott, Louisa May Alcott's younger sister, the one that Amy in Little Women is based on.  Abigail was also a very talented artist, whose painting was accepted by the Salon when Mary's was not, but she died tragically from complications of childbirth.  Unlike many of the Americans living in Paris at the time, Mary spoke perfect, but heavily accented, French, and many of her friendships were with French artists.

Paris itself is very much a character in the novel, as Mary's line, "Paris is raining," which occurs early in the book, would indicate.  This is a time when Paris is undergoing a great deal of change, much of it in the form of "improvements" such as wider streets, new buildings, and electric lights.  The inhabitants of Paris, though, did not consider these improvements at all, and they thought the city as they knew it was being destroyed.  It is interesting that people thought the Eiffel Tower was ugly when it was first built.  Oliveira does a wonderful job of drawing the reader into late 19th century Paris.  I highly recommend this novel for its depiction of the Impressionists, especially the two main characters, Mary Cassatt and Edgar Degas.  If you are not already familiar with their art, this novel will make you want to see it.

I Always Loved You is available from the Hatcher Graduate Library and the Shapiro Undergraduate Library.  It is the perfect novel to read in honor of American Artist Appreciation Month.

Here is a pastel by Mary Cassatt that I saw at the Art Institute of Chicago in December 2019. 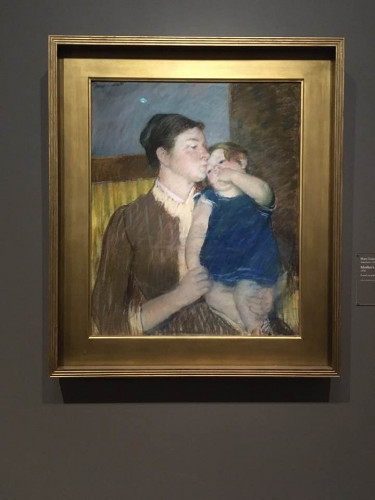