Heresy is the first in a series of mysteries by S.J. Parris (a pseudonym for Stephanie Merritt), featuring the real-life 16th century philosopher and scientist Giordano Bruno.  The novel begins with Bruno escaping from his monastery in Naples, pursued by the Inquisition, after being caught reading the forbidden works of Erasmus.  After several years spent wandering through Italy, and at the court of King Henri III of France, Bruno arrives in England, which is where the main part of the novel begins.  In 1583, Sir Francis Walsingham, Queen Elizabeth I’s spymaster, hires Bruno to go to Oxford to uncover a Catholic conspiracy against the queen.  Bruno travels to Lincoln College, Oxford, with his friend, the poet and soldier Sir Philip Sidney, who is engaged to Walsingham’s daughter, in the entourage of a visiting Polish prince.  Bruno actually has three reasons for going to Oxford.  He plans to debate the Copernican model of the solar system with John Underhill, the rector of Lincoln College, to track down the conspiracy against the queen, and to find a lost manuscript of a Greek work of mysticism, which he has reason to believe is hidden at Oxford.

But Bruno gets more than he bargained for, when, on the night of his arrival, one of the fellows of the college is found dead in a closed garden after being attacked by a starved hunting dog.  The rector wants to pass the death off as an accident to save the reputation of the college, but Bruno knows the man was murdered, because only a few people had access to the garden, and many of them had reasons for wanting the man dead.  Soon another death occurs, and this time there is no doubt that this was murder.  Bruno realizes that the murders are being deliberately made to imitate the martyrdom of early Christian saints, and that they are all part of the Catholic conspiracy he has been hired to uncover.  Will Bruno be able to find the murderer before all the fellows of the college are killed off?  Meanwhile, Bruno’s debate with the rector goes disastrously wrong, and he begins to feel an attraction to the rector’s daughter, the highly intelligent and sharp-witted Sophia.

Bruno is a wonderful protagonist for the series.  In real life, he was a man ahead of his time.  Not only did he believe, with Copernicus, that the earth and the planets revolved around the sun, at a time when this was considered heretical by the Catholic Church, but he went beyond Copernicus and believed the universe was infinite and that other stars besides the sun had planets revolving around them.  This was before Galileo’s telescope was invented.  Bruno also believed in religious tolerance, and found very little of it in Elizabethan England, where Catholics who were thought to be plotting against the queen were condemned to horrible deaths.  As a foreigner and a Catholic, although an excommunicated one, Bruno faces much hostility in Oxford.

Heresy is a very suspenseful mystery and an intelligently written novel.  Parris writes in detail of the philosophy and scientific beliefs of the 16th century and makes it interesting for the reader.  She also includes much detail of the academic politics of the time, which are not too different from academic politics today.  The novel is not for the squeamish: the bodies of the murder victims are described in gruesome detail, and we read about torture and public executions.  But Heresy is ultimately rewarding for its details of life in Elizabethan Oxford, for what you learn about the scientific theories of the time, and above all for the character of Bruno himself, a fascinating person.  There are currently five books in the series, with a sixth to come.  It is heartbreaking, though, when you know what is going to happen to Bruno in real life.

Heresy is available from the Hatcher Graduate Library. 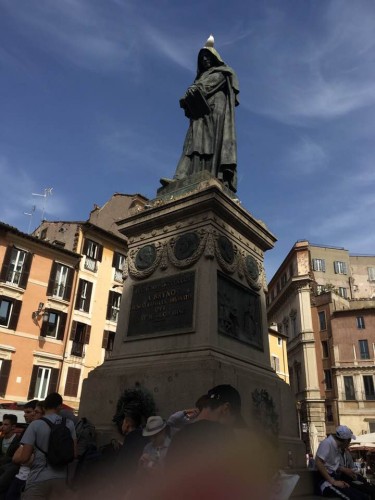 Statue of Giordano Bruno in the Campo de' Fiori, Rome.  This is a picture I took during my visit to Rome in April 2018.