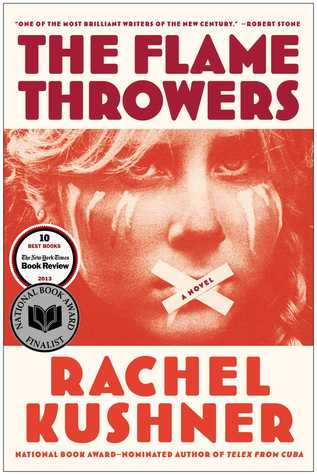 Set in New York City at the end of the 1970s, The Flamethrowers transports readers to a scene dominated by motorcycles, art, and a man named Sandro Valera.

Reno is new to New York City, an emerging artist, and in love with Sandro Valera. Sandro is the epicenter of a scene of artists, art critics, Italian expats. He is a respected artist and the estranged son of Italian tire and motorcycle manufacturer Valera. Reno, obsessed with motorcycles and art, is drawn to Sandro’s well established connections to both. Sandro, in return, is drawn to Reno’s lack of connections.

When Reno travels to the Bonneville Salt Flats to photograph motorcycle racers and to race her Moto Valera, she meets the Valera Company racing team. Because of her relationship with Sandro, one thing leads to another, and she ends up racing for the Valera Company. Reno wins a major time trial, becoming the fastest woman on earth. Reno returns to New York City victorious--only to find that Sandro resents her growing association with his family’s company.

Throughout the novel Reno is unable to separate what events happen because of her relationship Sandro, and what events are happenstance. When Reno travels to Italy with Sandro and is swept up into a labor struggle between workers and the Valera Company, she's unable to discern which side she's on.