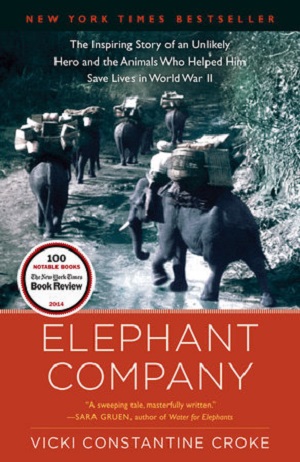 James "Elephant Bill" Williams moved to Burma from England following World War I to work in the teak industry as part of the British company, Bombay Burmah Trading Corporation.  The first part of the book covers Williams' early years in the company, learning about elephants and jungle life, and climbing the ranks in the company.  A highlight of his time there is his relationship with Bandoola, his favorite elephant.

I struggled internally with reconciling a story about colonialism and working animals with a positive protrayal of a man who was very much a part of this world.  But at the times when I could suspend my frustration with glorifying these activities, it was a great adventure book and Williams' relationship with the hundreds of elephants he cared for and knew, but most especially Bandoola, was heartwarming.

The final third or so of the book recounts Williams', his colleagues', and the elephants' efforts to lead refugees through the jungle and over seemingly unpassable mountains to safety as they flee the invading Japanese forces during World War II.  The book's subtitle sums up this part up: "The inspiring story of an unlikely hero and the animals who helped him save lives in World War II."

The book is nicely illustrated with photos and lovely sketches Williams made during his years in Burma.

You can find this book in the Hatcher Graduate Library.