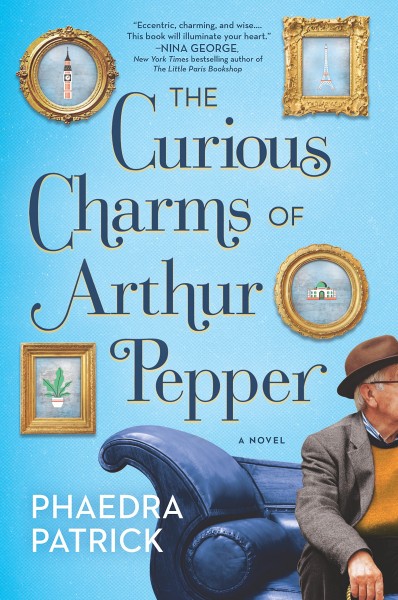 Sixty-nine year old Arthur Pepper has been grieving the loss of his wife for nearly a year.  He follows a very strict daily routine, cutting himself off from friends and family with his most prominent social interaction being with his fern, Frederica.  Then one day, as he is cleaning out his wife's clothes to take to the charity shop, he stumbles across a gold charm bracelet which he's never seen before.  Arthur starts tracking the origins of the charms and heads down a path to a place where he isn't sure he ever really knew his wife.

If Arthur Pepper were a much younger man, I'd call this a "coming of age" story, but at nearly 70 years old, that can't be the right word for Arthur's journey.  Arthur, a retired locksmith, and his wife Miriam lived a quiet, routine life.  Arthur assumed this had always been the case for both of them.  But as he chases clues from one charm to the next (an elephant with an emerald embedded in it, a tiger, a painter's palette, and several other charms), Arthur starts to realize his wife led a very different life before she met him and he wonders why she never mentioned any of  this to him.

As Arthur learns more about Miriam's past, he starts to question if he ever really knew the woman he had shared his life with for more than forty years.  Along the way, he also starts to regret his estranged relationships with his two grown children and works to repair them.    He stops hiding from those around him (he strikes what he calls the National Trust statue pose whenever his neighbor lady drops by with grief support group pamphlets or another dish of food), and he starts to interact with his neighbors and townspeople.

As Arthur learns more about the exciting, globe trotting life his wife led in her youth, he also begins to discover things about himself and what he wants to do in this next phase of his life.

You can find Phaedra Patrick's charming novel in the Hatcher Graduate Library.