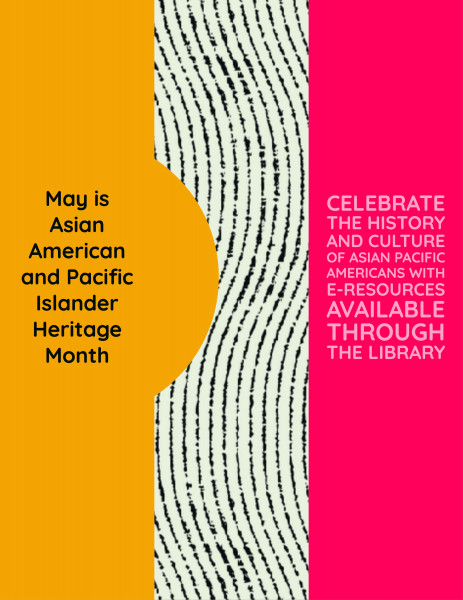 Now that classes are over, unwind and enjoy some summer reading. The library provides access to fiction both as e-books and e-audibooks. Check out Pulitzer Prize winning author Jhumpa Lahiri’s collection of stories in Unaccustomed Earth and Interpreter of Maladies. Have you been watching the Hulu drama miniseries Little Fires Everywhere? The library has both an e-book and an e-audiobook version of the novel Celeste Ng, upon which the show is based. You can also peruse poetry by Hieu Minh Nguyen, Oliver de la Paz, Aimee Nezhukumatathil, and Paisley Rekdal.

Have a passion for art? Learn about Asian American artists in our video streaming services! Born in Ohio, architectural artistMaya Lin is probably most known for designing the Vietnam Veterans War Memorial in Washington D.C. Once you’re back on campus, you can check out Lin's work IRL on North Campus, where she was commissioned to create the earthwork Wave Field in 1995. Isamu Noguchi was a Japanese-American artist, who you might recognize as designer of the classic Herman Miller Noguchi coffee table. Merce by Merce is an art video collaboration between dancer Merce Cunningham and Korean American artist Nam June Paik.

Included in the spreadsheet below are also films by Asian Americans, like well-known Hollywood director Ang Lee, the Academy Award nominated (and locally relevant) film Who Killed Vincent Chin? by Christine Choy, and independent filmmakers Gregg Araki and So Yung Kim.

This spreadsheet includes the previously noted titles and more.