In Brunelleschi’s Dome, Ross King tells the story of one of the world’s most incredible works of architecture, the dome of the cathedral of Santa Maria del Fiore in Florence, better known as the Duomo, and the irascible genius who created it, Filippo Brunelleschi.  The building of the cathedral began as early as the 13th century, but for over a century no one could figure out how to build a dome large enough for it.  In 1418, the committee in charge of the building held a competition for the design of the dome.  The decision between Brunelleschi’s design and that of his main rival, Lorenzo Ghiberti, was close, but Brunelleschi won out.  His design was revolutionary because he proposed building the enormous dome with no visible means of support.  He rejected the flying buttresses which were a typical feature of Gothic cathedrals because he, and his Italian contemporaries, thought they were ugly.  Instead, his design featured a self-supporting dome within a dome.  It was a daring innovation, and many people thought it would collapse in on itself.  But, of course, it has stood for centuries, and became the model for other famous domes including St. Peter’s in the Vatican, St. Paul’s in London, and the Capitol in Washington, D.C.

King’s entertaining narrative tells of Brunelleschi’s many innovations, including hoists and cranes used to haul the stones and bricks up to the top of the dome.  King also details Brunelleschi’s rivalry with Lorenzo Ghiberti, which began when Brunelleschi lost to Ghiberti in the competition to build the bronze doors of the Baptistery.  Furious over his defeat, he left for Rome, where he spent years studying the ruins, and as a result of his study he rediscovered the use of perspective in painting, which had been lost since the time of the ancient Greeks and Romans.  When he returned to Florence, Brunelleschi won the Duomo competition over Ghiberti, but Ghiberti and his supporters kept putting obstacles in his path.  Brunelleschi was briefly imprisoned for not paying his dues to the Masons’ Guild, something which many members of the guild failed to do, but only Brunelleschi was imprisoned for it.  There was a strong suspicion that Ghiberti or one of his followers was behind the imprisonment, even though King says that might not have been the case.  Besides his imprisonment, Brunelleschi had to overcome much adversity, including the theft of money by his adopted son, and the exile of his patron, Cosimo de’ Medici.  King also discusses Brunelleschi’s few failures, including a boat for transporting marble and a plan to flood the city of Lucca, which was at war with Florence.  But the genius of Brunelleschi’s greatest achievement, the dome of Santa Maria del Fiore, shines through.  On a personal note, I have recently visited Florence, and the dome truly is amazing.  It dominates the landscape, and people can always use it to find their way in the city.

Brunelleschi's Dome can be borrowed from the Art, Architecture, and Engineering Library.

Here is a picture of the Duomo that I took during my recent visit to Florence. 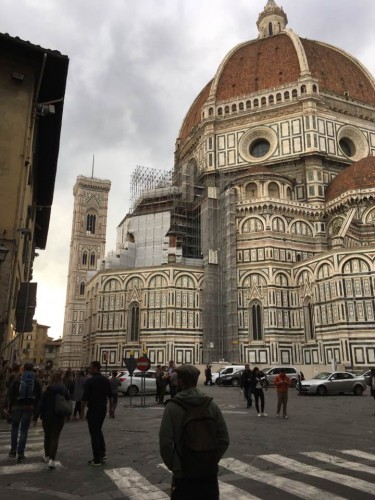