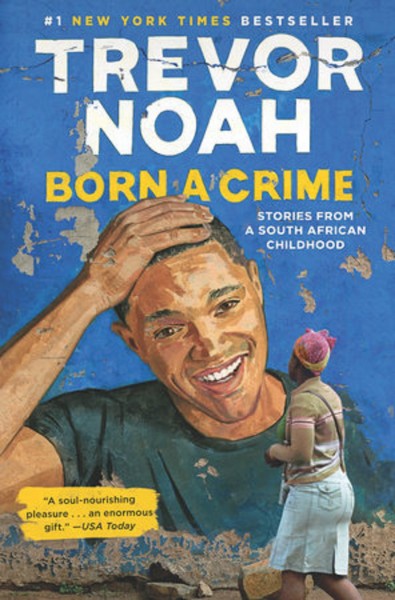 Trevor Noah was born in South Africa during the last years of apartheid.  During that time, it was illegal for blacks and whites to be together, so Noah's parents (a black South African woman and a white Swiss man) could have been jailed for up to five years and he could have been taken away from them and sent to an orphanage, just because he existed.

This book tells the story of Trevor Noah's childhood under apartheid and the early years of post-apartheid South Africa.  Always an outsider, he went to private schools, developed into an entrepreneur selling pirated CDs, and learned many languages.  This is also the story of his mother, a very religious woman, who raised him and tried to keep him on the straight and narrow -- a difficult task with her "very naughty" little boy.  Sundays were spent in church attending services at the black church, the white church and the colored church -- each having their own strengths and perspectives.

In addition to providing a look at Trevor Noah's childhood and youth, this book also provides a look at life in South Africa in the mid-1980s through the early 2000s.  Before each chapter is a small section that helps place the chapter in context both in Trevor's life, but also in the culture and history of South Africa.   This was useful, since it helped explain things like the racial designations (black, white, colored, and Indian) and how these were defined (Japanese were classified as white, but Chinese were classified as black) due in part, at least, on economic and poliitcal basis.

A very readable book this is a mix of humor, sadness, and history, but also you can sense the pure joy of being a young boy.  You can find copies in our collection in both the Hatcher Graduate Library and Shapiro Undergraduate Library Browsing Collection.