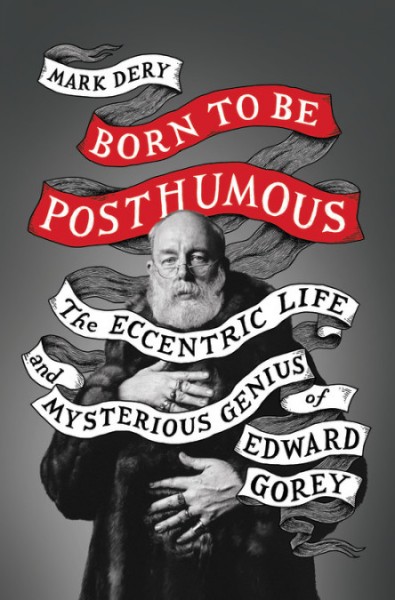 Mark Dery has written a very detailed book that covers the life and works of Edward Gorey from birth through death.  Born in Chicago in 1925, Gorey was creating art work for school publications and plays as early as high school.  Gorey was offered college acceptance at Harvard, University of Chicago, and the Art Institute, but put college on hold due to World War II.  With high IQ scores, he ended up in an Army intelligence unit.

Following the war, Gorey attended Harvard and then began a career in publishing as a book editor and illustrator.  He worked on books by other authors as well as publishing his own works and collaborations with others.   He must have driven catalogers crazy since many of his books were published under pseudonyms that were anagrams of his own name (for example, Ogdred Weary, Raddory Gewe, D. Awdrey-Gore, among others).

In addition to being a prolific freelance book illustrator, and writer of short, illustrated books, Gorey also wrote plays, did stage and costume design, had clothing lines (including fur coats), created the opening credits for PBS Mystery! and other creative endeavors.  He is best known for his black and white illustrations featuring Edwardian, Victorian and Jazz Age images.

He was a well-known eccentric wearing long fur coats and sneakers, living with several cats, and attending every performance of the New York City Ballet for decades in the Balanchine days.   He split his time between his New York City apartment and the attic in his cousins' house on Cape Cod, moving full-time to Cape Cod after Balanchine's death.

Dery interviewed many of Gorey's friends and family members and includes detailed notes and citations to other books and articles on Gorey's life.   The chapters unfold chronologically and are well illustrated with photos and reproductions of many of his drawings to highlight information on various books, theatrical pieces, etc.  The book ends with more than three pages detailing his books, extensive notes, and an index.

Born to be Posthumous:  The Eccentric Life and Mysterious Genius of Edward Gorey can be found in the Shapiro Undergraduate Library and Fine Arts Library collections.   You can find a list of many of the books written and/or illustrated by Gorey here.  For more books about Gorey or his art, you can check out this list.