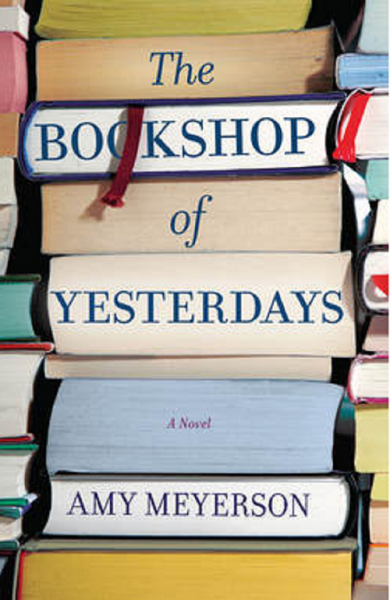 In Amy Meyerson's The Bookshop of Yesterdays, Miranda Brooks receives a package from her recently decesased Uncle Billy that starts her down the path of solving a mystery.   As a child, Uncle Billy was a major influence in Miranda's life.  He gave her puzzles to solve and on trips to his bookstore, Prospero Books, she was always allowed to pick out a book to keep.

On Miranda's 12th birday, Uncle Billy and his sister (Miranda's mom) have a fight and after that, Miranda never sees or hears from Uncle Billy again.  No one ever explained the reason for this break with Uncle Billy, and after many years Miranda almost forgets him.  Now a 27-year-old middle school history teacher, Miranda lives in Philadelphia and has just moved in with her boyfriend, Jay.  Then she receives a package and the first of many clues from Uncle Billy, and soon after learns he has died.

Miranda returns to California to attend Billy's funeral and to follow the clues of this one last puzzle.  She starts to work at Prospero Books to try to save the failing bookstore and find a new owner, and over the summer meets other people from Billy's life as she follows the clues he has left for her.  The more she learns, the more estranged she and her mother become as years of family secrets start to be revealed.

The Bookshop of Yesterdays is available at the Shapiro Undergraduate Library.