Historian Catherine Fletcher tells the fascinating story of Alessandro de' Medici (1511 or 1512-1537), the first Duke of Florence and arguably the first person of African descent to rule a European state.  Alessandro was the illegitimate son of Lorenzo II de' Medici, grandson of the more famous Lorenzo, and a servant woman, possibly an African slave, named Simunetta.  The identity, and ethnicity, of his mother has been debated, and even his paternity has been questioned.  Fletcher favors the most common theory, that Lorenzo was his father, but others believe his father was Lorenzo's relative, Pope Clement VII.  Lorenzo died when Alessandro was a child, and Alessandro grew up outside Florence.  There is evidence that he was not accepted as part of the family at first, but after all of Pope Clement's legitimate male heirs died out, Clement was left with no choice but to acknowledge him.  Lorenzo had one legitimate child, Catherine, but the people of Florence did not want a female ruler.  Catherine eventually became Queen of France.

Instead, there were two male heirs, both illegitimate: Alessandro and his slightly older cousin Ippolito.  At first Ippolito was favored because his mother was of a higher social status than Alessandro's.  But Clement decided he wanted Ippolito to be a cardinal, with hopes of his eventually becoming pope.  That left Alessandro to rule Florence.  During the wars between France and Charles V's Holy Roman Empire for control over the various Italian states, the enemies of the Medici family, who believed they were tyrants, exiled them from Florence, and so Alessandro spent time at the papal court in Rome.  As part of a treaty between Pope Clement and Charles V which ended that particular phase of the Italian wars, the Medici returned to Florence with Alessandro, at only nineteen, as duke.  He was betrothed to Charles V's illegitimate daughter, Margaret of Austria.

The jealous Ippolito was furious that Alessandro was chosen to be duke.  He never wanted a career in the Church, and tried to leave the College of Cardinals, as Cesare Borgia had done before him, but he did not succeed.  He plotted several times to have Alessandro killed and replace him as duke.  Ippolito died under mysterious circumstances, probably by poison, even though we will never know if Alessandro had anything to do with his death, as has been rumored.

Alessandro's rule in Florence has been described as tyrannical, but most of the accounts were written by his enemies.  Fletcher paints a balanced portrait.  It's true that Alessandro had several of his enemies executed, and even more sent into exile, and it's likely he was involved in the death of at least one family member, but he also expressed sympathy for the common people, even slaves.  He was also a patron of artists such as Benvenuto Cellini and Giorgio Vasari.  Alessandro also had a reputation as a womanizer, which may be exaggerated.  He had a stable relationship, and two children, with a mistress, and he seems to have been genuinely affectionate toward his child bride, Margaret.  In 1537, he was assassinated by a distant relative, Lorenzino, who arranged for a tryst between Alessandro and a famous Florentine beauty, and then stabbed him in bed.

Fletcher writes entertainingly of the splendor of Alessandro's court, with its banquets, jousts, and hunts, and his wardrobe and collections of swords and guns.  Alessandro was more of an athlete and hunter than an intellectual, but he certainly did appreciate the arts.  In a fascinating afterword, Fletcher discusses Alessandro's ethnicity, which seems more significant today than in his own time.  The modern concept of race did not exist in Renaissance Italy.  The color of Alessandro's skin did matter to his contemporaries, but the social status of his parents, and whether or not he had noble blood, mattered more.  After Alessandro's assassination, there were attempts to suppress his memory.  Fletcher brings his world brilliantly to life and, hopefully, his story will become more widely known.

The Black Prince of Florence can be borrowed from the Hatcher Graduate Library.  A second copy is also available from Hatcher. 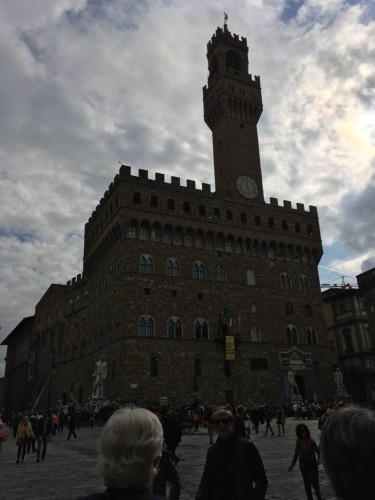 This is a photo of the Palazzo della Signoria in Florence, the seat of government in Alessandro's time, which I took during my recent visit to Florence.