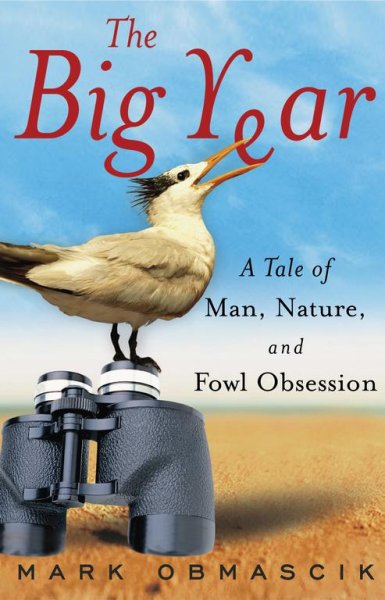 The Big Year was an intentional find in the stacks for me. When reading for pleasure I often browse and hope to simply alight upon a good title; sometimes something else leads me to a particular volume.

It all started this summer when I decided to feed the birds. After having planted some vegetables and flowers in the garden, it seemed like adding a bird feeder would be just the thing to round out a pleasant backyard environment. Shortly after mentioning my desire to feed the birds to my husband, he brought home a suet feeder for me. This was quickly followed by a thistle sock and a traditional seed feeder that looks like a little house. I am grateful to have such a caring and attentive partner, who listens to me and helps me accomplish my goals. In fact, the whole family became involved in bird watching this summer. My daughter started requesting The Kids Guide to Birds of Michigan during story time. We sat out on the deck together to see who was eating from our feeders. Our most frequent visitors are the chickadees, but we also have a nice assortment of standard backyard birds—and of course the chipmunks and squirrels have also found the feeders.

One day while watching the birds I remembered a movie that I had watched some years ago called The Big Year because it tells the story of three birders. These are no amateur backyard bird spotters. These guys are serious birders engaged in a competition, the “Big Year,” to see the most species of birds in a single year. I came upon this film back when I still went to the video store to browse in-person for my Friday night entertainment in the form of physical DVDs (incidentally, the movie is not available on any of the  major streaming services but it is at the local public library). At the time, I picked The Big Year not for the birds, but because it stars Owen Wilson, one of my favorite actors for his honey suave voice and good looks. In fact, the entire Big Year cast is excellent. It also stars Jack Black and Steve Martin and features Anjelica Huston and Rashida Jones. The story is quirky, the tone is good-natured; it’s a very pleasant film.

After re-watching The Big Year movie, I noted the credits acknowledge that the film is based upon a book. I had to read the book! The Big Year: A Tale of Man, Nature, and Fowl Obsession is written by Mark Obmascik, an environmental journalist and self-proclaimed obsessed birder. At first, I started comparing the book to the movie. Both follow the stories of the three men who dominated the 1998 Big Year competition: Sandy Komito recorded a total sighting of 745 unique bird species in North America, Greg Miller saw 715, and Al Levantin made it to 711 reported bird species. Komito’s record was astounding, significantly higher than any previous Big Year winner’s and even breaking his previous Big Year record of 721 birds. Of course, the movie is a fictionalized account and changed the names and personal stories of the men. In the film, Komito becomes the character Kenny Bostick (played by Owen Wilson); Greg Miller is Brad Harris (Jack Black’s character); and Al Levantin turns into Stu Preissler (portrayed by Steve Martin). The movie versions of the men aren’t too far off from the real men, albeit with some significant cinematic liberties that creates a more directed emotional experience. What a feature film can’t do is provide the extensive background and meticulous research that Obmascik artfully weaves into the story.

It didn’t matter that I can just barely describe bird watching as a newfound hobby and can probably identify only a dozen bird species—you don’t need to be a birder yourself to be swept into the drama of the Big Year adventure. Obmascik traces the stories of Komito, Harris, and Levantin back to their childhood roots, to investigate what drives someone to devote an entire year of their lives to birding. The lengths that these men go to in order to chase down birds are incredible. There is personal sacrifice:  spending enormous amounts of money on travel, barely seeing their families. There is physical toll: constant travel, hiking into the field, rollicking ocean voyages, horrific smells (garbage dumps are a big attraction for some bird species), and more. There is strategy: following weather events and bird migration patterns, tapping into the rare bird alert networks. I was impressed by the commitment to the sport of birding and inspired by the adventures. The Big Year elicits a combination of free-spirited exploration with a quest that requires assiduous devotion to the goal.

As an academic librarian, I was thrilled by the integration of history and literature. Obmascik points out that birding is perhaps one of the most literary sports there is. There are field guides, birder stories and memoirs. Among the earliest of these guides is The Birds of America by Jean-Jacques Audubon. The Big Year competition originates with Audubon’s birding adventures and the eventual sponsoring of the Big Year competition by the Audubon Society (although it is now under the auspices of the American Birding Association). In fact, the University of Michigan library started its collection with Audubon’s The Birds of America as our first major acquisition. The book, in all of its oversized full color glory, is currently on permanent display in the Hatcher Graduate Library, where an entire room is named after it: the Audubon Room is located within the Gallery on the first floor of the North wing. And finally, nothing warms a librarian’s heart like the recounting of Komito’s childhood and his frequent visits to the public library to memorize Roger Tory Peterson’s A Field Guide to the Birds.