In April Blood, historian Lauro Martines tells the story of a plot to assassinate Lorenzo de' Medici, the unofficial ruler of Renaissance Florence.  In April 1478, assassins attacked Lorenzo and his younger brother Giuliano as they attended Mass in Florence's cathedral, Santa Maria del Fiore, better known as the Duomo.  Giuliano was killed, but Lorenzo escaped and took swift and bloody revenge on the assassins and everyone else who had even a slight connection with the plot.  The assassins were members and friends of the Pazzi family, a banking family who had been rivals of the Medici for years.  Their hatred of the Medici had been simmering for a long time, in spite of Lorenzo's sister's marriage to one of the Pazzi.

But the roots of the plot went much deeper than a mere family rivalry, and it is these roots that Martines traces.  The pope, Sixtus IV, the King of Naples, and the Duke of Urbino were all involved.  Each had a reason to hate Lorenzo.  The pope, especially, emerges as a central figure.  Sixtus wanted to carve out a princely state for his nephew, Count Girolamo Riario.  (Girolamo was the husband of Caterina Sforza, a powerful woman of the Renaissance.  For a biography of her, see The Tigress of Forli by Elizabeth Lev.)  The town of Imola was at the heart of the state Sixtus desired for Girolamo, but Lorenzo also wanted Imola because it was on the trade route between Florence and Venice.  The Medici bank would not give Sixtus a loan to buy Imola, so the pope changed from the Medici to the Pazzi as the papal bankers.  Meanwhile, Lorenzo objected to Sixtus's appointment of Francesco Salviati as Archbishop of Pisa.  At this time, Pisa was subject to Florence.  Salviati was a known friend and ally of the Pazzi.  He became one of the main conspirators against Lorenzo.

At first the conspirators were going to kill Lorenzo when he went to Rome for Easter, but he decided not to make the journey.  Various places were suggested as the site of the assassination.  Eventually the visit of Sixtus's great-nephew, a teenage cardinal, to Florence was chosen as the occasion for the plot to be carried out.  Armed men were hidden among the young cardinal's entourage.  But the mercenary soldier who was supposed to kill Lorenzo refused to do the deed in church.  It was his confession that led to the arrest of many of the conspirators.  Francesco de' Pazzi and a friend of his did not have such scruples, and they ended up killing Giuliano and being hanged for the murder, along with Archbishop Salviati.

April Blood is much more than just the story of the murder plot, although that is fascinating in itself and reads like a political thriller.  It also paints a picture of life in Renaissance Florence, beginning with the Medici's rise to power.  Although they were officially private citizens, the Medici manipulated the political system so that their followers were always chosen for public office.  Martines gives a detailed description of the Florentine political system.  Many of the offices were chosen by lot and rotated every two months, but the Medici had ways of ensuring that candidates who supported them were chosen.  Also, Martines includes detailed discussions of Renaissance banking and the arranging of marriages.  He includes a letter from Lorenzo's mother, Lucrezia Tornabuoni de' Medici, in which she describes a potential bride for her son.  She goes on for pages about the girl's appearance and family connections, and only at the end does she mention her name.  That was typical of the time, as Martines explains.

Martines is less sympathetic to Lorenzo than many authors, and he makes his bias clear.  He does write about Lorenzo as a poet and patron of the arts, but according to Martines, Lorenzo was a politician, and a ruthless one, above all.  The descriptions of the revenge Lorenzo took on the Pazzi family are not for the squeamish.  Not only were some of the Pazzi hanged, but the body of at least one of the principal members of the family was desecrated.  The Pazzi who escaped execution were imprisoned or exiled, and their name and coat of arms were erased from all public monuments and streets.  They were not allowed to return to Florence until Lorenzo's son Piero was overthrown in 1494.  Martines provides a perspective that is not typical of authors who write about this time period, many of whom are sympathetic to the Medici.  Once you understand his bias, April Blood makes for fascinating reading.

April Blood is available from the Fine Arts Library and the Shapiro Undergraduate Library. 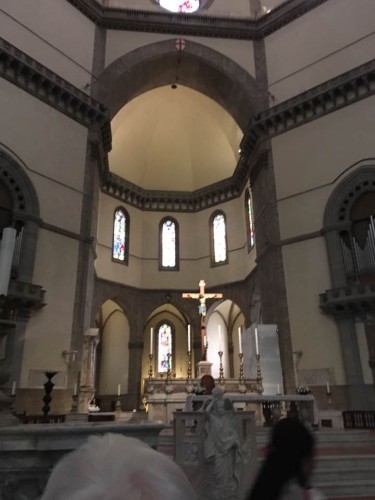 The altar of the Duomo, Florence, where Giuliano de' Medici was killed.  This is a photo I took during my recent visit to Florence.