While Venice lies in the grip of the acqua alta, the high tide that floods the city every winter, archaeologist and art historian Brett Lynch suffers a brutal beating in the home she shares with her partner, opera singer Flavia Petrelli.  Brett does not recognize her attackers, and the only clue they leave is a warning not to keep her meeting with the director of the museum in the Doge's Palace.  Commissario Guido Brunetti, who is acquainted with Brett and Flavia from another case (see Death at La Fenice, the first of Donna Leon's series), investigates the attack. At first he finds clues that lead him to believe the museum director had a shady past, but nothing that would have caused such violence.  The case deepens when the museum director is found murdered in his office.  As it turns out, the dead man was involved in having ancient Chinese vases stolen and replaced by fakes during an exhibition at his museum.  Brett discovered the substitution when the vases were returned to China.  Since Brett was in charge of the exhibition, she will be held responsibile for the thefts unless Brunetti can find the original vases, and the murderer.  Will Brunetti catch the killer and save Brett's career?

Acqua Alta is the fifth in Donna Leon's Brunetti series, and it can be read on its own, even though it helps to have read at least the first book, Death at La Fenice, because it introduces the characters of Brett Lynch and Flavia Petrelli.  As usual, Leon gives the reader an excellent sense of what life in Venice is like.  The acqua alta pervades this book, and you will realize how difficult it is even to get from place to place in Venice during the high tides of winter.  Also, as is typical for Leon, she contrasts the violent events of the attack and murder with Brunetti's loving family life. In this book, Brunetti worries that he has not been a good father to his teenage son Raffi.  When he finds syringes in Raffi's room, Brunetti is afraid that his son is addicted to drugs.  It turns out there is a perfectly innocent, and very funny, explanation of the presence of the syringes, but Brunetti's fears are very realistic. Art-lovers should especially enjoy this book, since it explores the world of art, and how to tell an original from a forgery, in some detail.  Also, as an opera-lover, I enjoyed the parts about Flavia's performances, especially a flashback to a strange production of Puccini's Tosca by a German director. Anyone who has seen opera in Germany will know that Leon's description is perfect.

I apologize to readers of Lost in the Stacks, especially the person who said there was little variety in the posts, for reviewing another Donna Leon mystery so soon.  But I was getting ready for my first trip to Venice, so I couldn't help myself.  Her books are perfect reading for anyone who wants to go to Venice, or has been there and wants to go back.

Acqua Alta is available from the Shapiro Undergraduate Library . 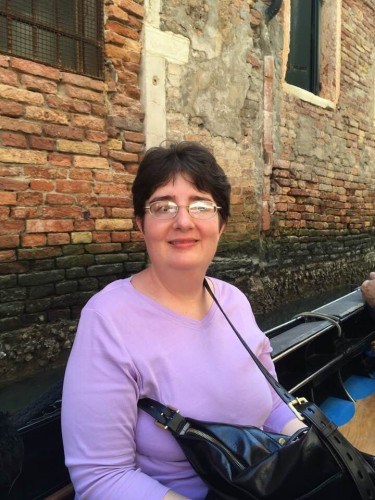 This is a photo of me in a gondola, during my recent trip to Venice.  You can see the high water mark on the building, left by the acqua alta.