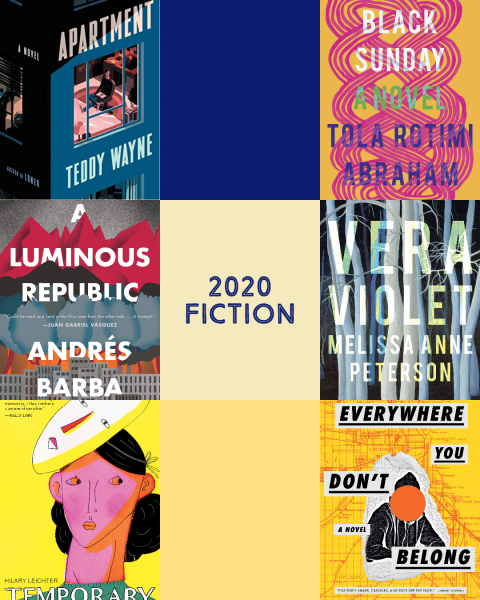 Need to take a break from finishing up this wild semester and unwind? The library has access to a variety of e-books not limited to academic subject matter. Over the next few weeks, I'll be highlighting titles from the library's Online Recreational Reading guide, focusing on different genres and subjects each post. Today, I want to highlight some fiction books published in 2020 that we have available electronically.

In this alternately witty and heartbreaking debut novel, Gabriel Bump gives us an unforgettable protagonist, Claude McKay Love. Claude isn't dangerous or brilliant--he's an average kid coping with abandonment, violence, riots, failed love, and societal pressures as he steers his way past the signposts of youth: childhood friendships, basketball tryouts, first love, first heartbreak, picking a college, moving away from home.    Claude just wants a place where he can fit. As a young black man born on the South Side of Chicago, he is raised by his civil rights-era grandmother, who tries to shape him into a principled actor for change; yet when riots consume his neighborhood, he hesitates to take sides, unwilling to let race define his life. He decides to escape Chicago for another place, to go to college, to find a new identity, to leave the pressure cooker of his hometown behind. But as he discovers, he cannot; there is no safe haven for a young black man in this time and place called America.

In 1996, the unnamed narrator of Teddy Wayne's Apartment is attending the MFA writing program at Columbia on his father's dime and living in an illegal sublet of a rent-stabilized apartment. Feeling guilty about his good fortune, he offers his spare bedroom--rent-free--to Billy, a talented, charismatic classmate from the Midwest eking out a hand-to-mouth existence in Manhattan.The narrator's rapport with Billy develops into the friendship he's never had due to a lifetime of holding people at arm's length, hovering at the periphery, feeling "fundamentally defective." But their living arrangement, not to mention their radically different upbringings, breeds tensions neither man could predict. Interrogating the origins of our contemporary political divide and its ties to masculinity and class, Apartment is a gutting portrait of one of New York's many lost, disconnected souls by a writer with an uncommon aptitude for embodying them.

In Temporary, a young woman's workplace is the size of the world. She fills increasingly bizarre placements in search of steadiness, connection, and something, at last, to call her own. Whether it's shining an endless closet of shoes, swabbing the deck of a pirate ship, assisting an assassin, or filling in for the Chairman of the Board, for the mythical Temporary, “there is nothing more personal than doing your job.” This riveting quest, at once hilarious and profound, will resonate with anyone who has ever done their best at work, even when the work is only temporary.

Simultaneously unique and universal'(NPR), this fiercely original debut novel follows the fate of four siblings over the course of two decades in Nigeria as they search for agency, love, and meaning in a society rife with hypocrisy.“I like the idea of a god who knows what it's like to be a twin. To have no memory of ever being alone.”Twin sisters Bibike and Ariyike are enjoying a relatively comfortable life in Lagos in 1996. Then their mother loses her job due to political strife, and the family, facing poverty, becomes drawn into the New Church, an institution led by a charismatic pastor who is not shy about worshipping earthly wealth. Soon Bibike and Ariyike's father wagers the family home on a “sure bet” that evaporates like smoke. As their parents' marriage collapses in the aftermath of this gamble, the twin sisters and their two younger siblings, Andrew and Peter, are thrust into the reluctant care of their traditional Yoruba grandmother. Inseparable while they had their parents to care for them, the twins 'paths diverge once the household shatters. Each girl is left to locate, guard, and hone her own fragile source of power. Written with astonishing intimacy and wry attention to the fickleness of fate, Tola Rotimi Abraham's Black Sunday takes us into the chaotic heart of family life, tracing a line from the euphoria of kinship to the devastation of estrangement. In the process, it joyfully tells a tale of grace and connection in the midst of daily oppression and the constant incursions of an unremitting patriarchy. This is a novel about two young women slowly finding, over twenty years, in a place rife with hypocrisy but also endless life and love, their own distinct methods of resistance and paths to independence.

A Luminous Republic by Andrés Barbas

A new novel from a Spanish literary star about the arrival of feral children to a tropical city in Argentina, and the quest to stop them from pulling the place into chaos. San Cristóbal was an unremarkable city--small, newly prosperous, contained by rain forest and river. But then the children arrived.   No one knew where they came from: thirty-two kids, seemingly born of the jungle, speaking an unknown language. At first they scavenged, stealing food and money and absconding to the trees. But their transgressions escalated to violence, and then the city's own children began defecting to join them. Facing complete collapse, municipal forces embark on a hunt to find the kids before the city falls into irreparable chaos.

Set against the backdrop of a decaying Pacific Northwest lumber town, Vera Violet is a debut that explores themes of poverty, violence, and environmental degradation as played out in the young lives of a group of close-knit friends. Melissa Anne Peterson's voice is powerful and poetic, her vision unflinching. Vera Violet recounts the dark story of a rough group of teenagers growing up in a twisted rural logging town. There are no jobs. There is no sense of safety. But there is a small group of loyal friends, a truck waiting with the engine running, a pair of boots covered in blood, and a hot 1911 pistol with a pearl grip. Vera Violet O'Neel's home is in the Pacific Northwest—not the glamorous scene of coffee bars and craft beers, but the hardscrabble region of busted pickups and broken dreams. Vera's mother has left, her father is unstable, and her brother is deeply troubled. Against this gritty background, Vera struggles to establish a life of her own, a life fortified by her friends and her hard-won love. But the relentless poverty coupled with the twin lures of crystal meth and easy money soon shatter fragile alliances. Her world violently torn apart, Vera flees to St. Louis, Missouri. There, alone in a small apartment, she grieves for her broken family, her buried friends, and her beloved, Jimmy James Blood.