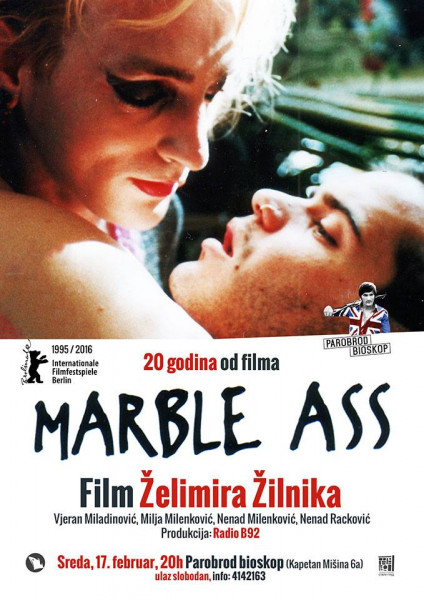 Marble Ass (Serbian: Dupe od mramora) directed by Želmir Žilnik, a leader of the Yugoslav Black Wave movement in cinema, premiered in 1995 at the Berlin International Film Festival, where it received the Teddy Award (presented to a film outstanding in its treatment of LGBTQ themes). The raucous, colorful film, characterized by its macabre humor, follows Merlinka, a trans sex worker on the streets of Belgrade, and her companions as they encounter and pacify through sex often angry, violent, hypermasculine male clients, and in particular Johnny, a solider on leave from the Bosnian War. Merlinka’s bending of “conventional” gender and sex roles, her pacifism, and her devotion to pleasure are potent forces in the film as they present a critique of and, indeed, subvert the dominant national identity, one characterized by its corrosive, patriarchal chauvinism. 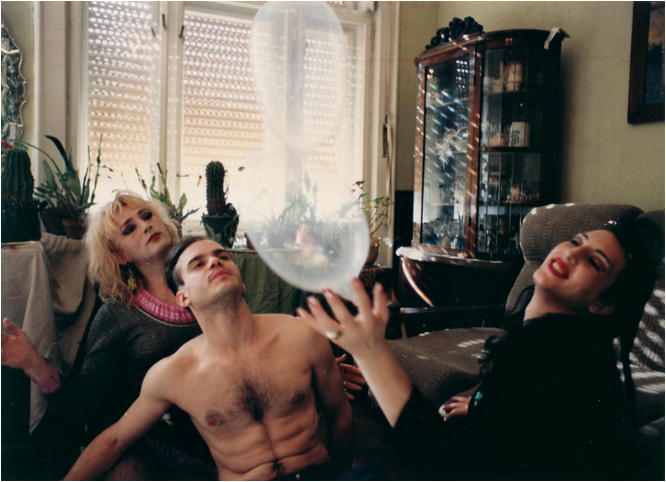 Recognized as the first Serbian film to depict openly LGBTQ characters, Marble Ass was a pioneer of the region’s queer cinema in other important ways. Perhaps most significantly, the picture features non-heteronormative protagonists who command a dignity and an agency not present in other examples of early post-Yugoslav queer film. As critic Fedor Tot observes, for example, while other well-known films such as Dalibor Matanićs Fine Dead Girls (Croatia, 2002), Ahmed Imamović’s Go West (Bosnia, 2006), and Srdjan Dragojević’s Parada (Serbia, 2011) do centralize LGBTQ characters, those characters are hardly self-determined; quite to the contrary they usually figure as mere “pawns in a wider game at the hands of a normative heterosexual society.” Those later films thus do not explore the ennobling sides of LGBTQ experience and instead “have a tendency to focus on reductive narratives of suffering.” By contrast, Tot calls Marble Ass a “masterpiece of empathy.” I would say that the film does more than empathize with its protagonists. Rather it valorizes them, allowing exactly the non-conforming dimensions of their experience to come forward as sources of profound power.

For this viewer, some unexpected facts surrounding Marble Ass’s production and reception add to the film’s charm and its humanity, too. For instance, Marble Ass’s heroine was based on a real person (who plays herself in the film) and, in fact, the black comedy was initially undertaken as more of a documentary. Director Želmir Žilnik was approached by the film’s real life subject at a train station in Belgrade. Only after chatting with her for some time did Žilnik realize that he knew the woman who introduced herself as Merlinka. Before she transitioned, Merlinka had lived as the actor Vjeran Miladinović, with whom Žilnik had worked on a previous film. Merlinka introduced the director to her friends and invited him into their world. Žilnik and his crew began filming the company of sex workers, even secretly recording their encounters with clients, until they were once caught during their covert filming, whereupon the john started firing a gun at the crew (Tot). To help ensure that the fictionalized movie stayed faithful to its source material, though, Žilnik had the real Merlinka and her friends take an active role in writing the script. Equally unexpected, given the film’s content and its cultural context, was that Marble Ass encountered no obstacles to release and was received warmly by audiences and critics. That the film, whose unflinching depictions of both grisly violence and hardly Puritan sex acts will still raise some eyebrows today, did not become the subject of scandal or censure can only testify to its essential honesty and the sensitivity with which it tells its story.
On the other hand, tragically, the real Merlinka’s fate did not match that of her cinematic incarnation. Merlinka was murdered in 2003, her killer never identified. However, in honor of the film and the individual it portrayed, Belgrade’s annual LGBTQ film festival adopted the name Merlinka. Outside the former Yugoslavia, Marble Ass still remains a more obscure film. Indeed, the University of Michigan looks to be the only US institution to have it on DVD. It deserves some more visibility here, so maybe grab it from Askwith for a weekend!
Tot, Fedor. “Marble Ass, Yugoslavia’s First Openly Queer Film, Turns 25. Here’s Why You Need to Watch It.” The Calvert Journal, 19 February 2020.