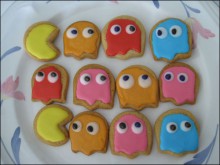 At the blog Snack or Die, Jocelyn shows how to make cookies (and other desserts) designed after your favorite video game characters. It's yummy fun!

Interface design librarian extraordinaire Suz sent me a link to this awesome Game Console Controller Family Tree, where you can see how controllers for game consoles have evolved over the years.

The Education Arcade at MIT

With this blog I hope to not only talk about our upcoming Computer & Video Game Archive here at the MLibrary, but also document my exploration into the relatively-new-to-me world of games in the academy. First up is The Education Arcade at MIT.